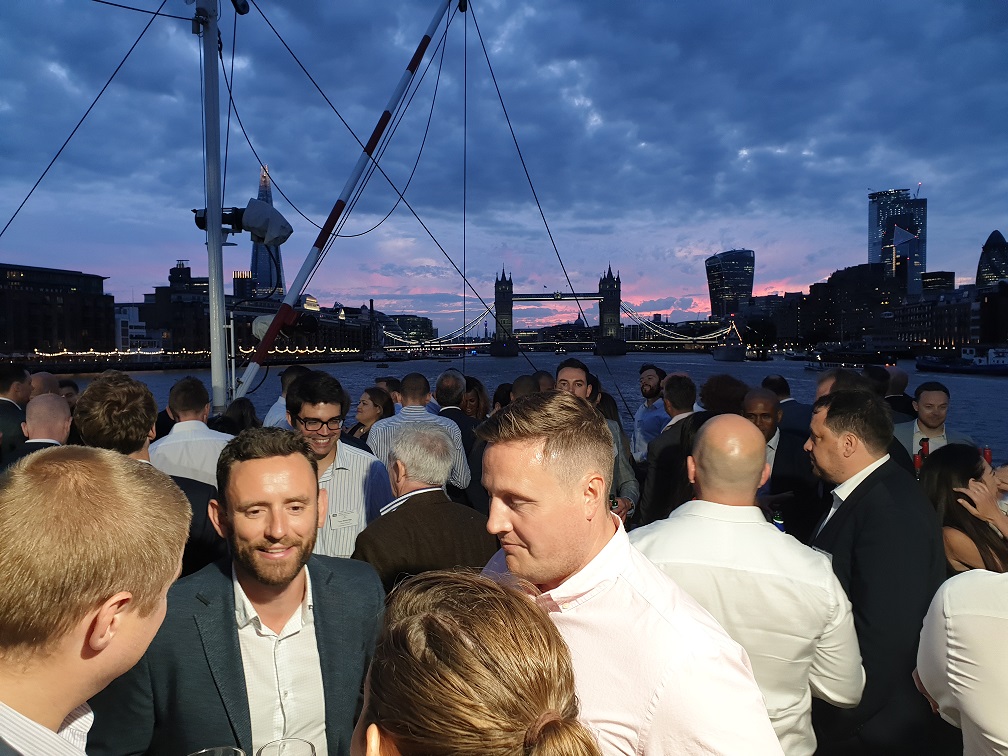 The date for next year's Summer River Boat Party have already been announced - July 9 and tickets are already available.

The ThisWeekinFM Facilities Industry Annual Summer River Boat Party - Thursday 11 July 2019.  Balmy weather, a massive pre-drinks turnout and England reaching the Cricket World Cup Final (which they famously went on to win) were the backdrop to a marvellous evening of socialising.

Just under the expected guests of 399 boarded the replica paddle steamer The Dixie Queen, the biggest pleasure boat on the River Thames, as she set sail at 6:30pm prompt...leaving a few sorry souls on the South Bank near Tower Hill (a warning to guests next year - we cannot wait beyond our allotted time.)

The Dixie dwarfed all other river traffic as she made her way down river against the tide as the conversation flowed - and so did the wine and beer (not to mention the G&Ts). Dinner was served at 7:00pm - a full carvery this time around was available (three meats and a veggie option), and/or gorgeous Red Snapper; African inspired dishes for vegetarians and meat eaters alike; some plainer veggie options and bundles of salad. Delicate deserts were brought round to tables later in the evening. Guests could help themselves to as much coffee and tea as they wished.

Remember, the date for next year's Summer River Boat Party has already been set as July 9. Sponsorship opportunities can be booked now.  Contact di.searle@twinfm.com

Many Sponsors, Table Hosts and General Attendees have already reserved their slots for next year.

Thank you to sponsors

A big thank you should go to all the party Sponsors.

The Headline Sponsor was Ezitracker.

The pictures from the PTSG sponsored Giff Photo Booth are below.

Again this year and also generously sponsored by PTSG, guests were amazed by a variety of new illusions constructed by extremely talented magician Kieran. Unfortunately, he was unable to pull off the trick of the night by ensuring Tower Bridge opened in The Summer River Boat Party's honour allowing The Dixie Queen to dock on the north side of the river - a police incident on the bridge meant the boat was obliged to hold her position prior to docking back on the South Bank.

Many guests stayed aboard once docked enjoying a last drink and conversation before joining the various after-parties at the pubs and bars along the river.

Picture: A view from the Summer River Boat Party.

Round-Turner Visuals captured some awesome footage during the evening.  A showreel will be available soon.

Thursday July 12 and the ThisWeekinFM Facilities Industry Annual Summer River Boat Party set sail in glorious weather with over 400 souls on board.  See the showreel...