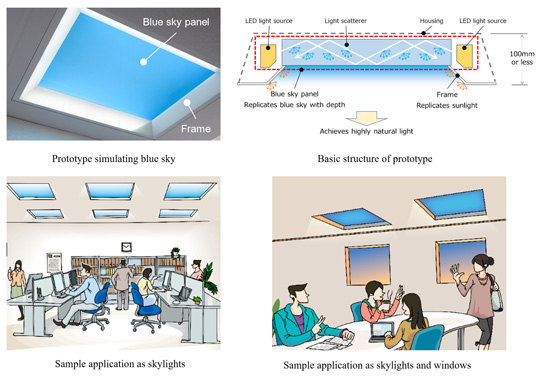 An indoor lighting technology that mimics the daily change of natural light from sunrise to blue sky to sunset, has been revealed in Tokyo and Chiba by the Mitsubishi Electric Corporation.

The system, which consists of a thin panel and frame measuring less than 100mm, incorporates a proprietary edge-lit method that emits LED light from the side of the light panel to achieve highly natural light with the depth and colour of the sky.

Mitsubishi Electric launched the system in Tokyo and then displayed its new technology during CEATEC JAPAN 2018 at the Makuhari Messe exhibition complex in Chiba, Japan from October 16 to 19. The timing of the envisioned commercial release will be announced later.

At a presentation at the expo, a Mitsubishi spokesperson said: "Modern workplaces are being upgraded to create comfortable environments that stimulate and motivate employees. This includes the enhancement of lighting in offices that have darkened or covered windows or no windows altogether.

"Mitsubishi Electric's new system, unlike conventional LED lighting systems, produces highly natural light, including colours similar to those of sunrises and sunsets as well as blue skies and creates a sense of depth to make indoor spaces feel larger and more open."

The tests are expected to demonstrate that the system simultaneously measures water vapour in the air and upward air currents, which cause cumulonimbus clouds, quicker, more accurately and in a wider range compared to conventional alternatives. Mitsubishi Electric expects to make further improvements prior to launching a commercial system.

Picture: Mitsubishi Electric spent the week demonstrating an indoor lighting system that mimics the daily change of natural light from sunrise to blue sky to sunset.

Shining A Light On Code L

The latest advantages in lighting technologies and controls are addressed in the new edition of Lighting Commissioning Code L, published by CIBSE.   The latest...

Bouygues Energies & Services has completed a partnership with Redcar & Cleveland Borough to replace 90 per cent of the street lighting in the borough with...

Natural Light – Importance in the Workplace

A recent survey by Future Workplace concludes that natural light makes a considerable difference to employee wellbeing. The opinion of many that participated in...