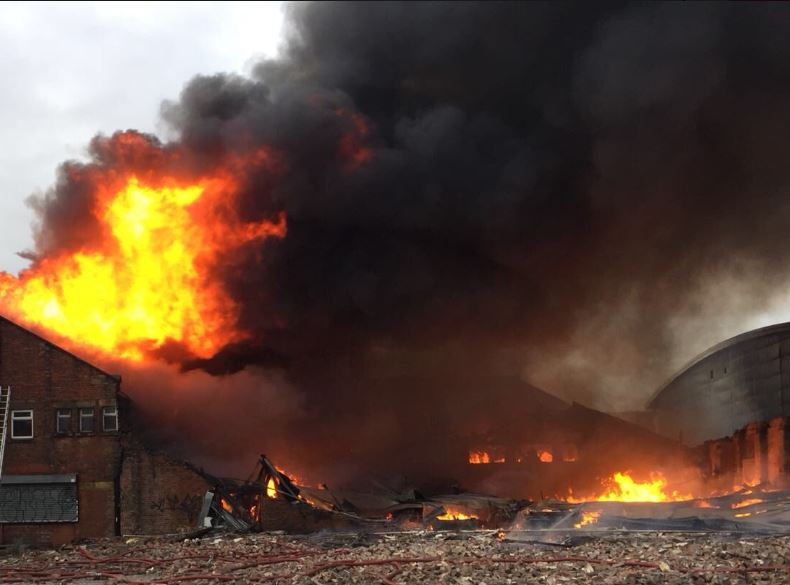 A massive fire overnight at commercial premises in Ardwick in Manchester has seen four fire engines out of the original twelve still at the scene along with an aerial platform that continues to tackle the fire from above.

The blaze broke out on August 7 at 7:oopm and at 6:00am on August 8, Station Manager Lee Bourne, who had taken charge of the incident during the night said: "It's been a long night, our firefighters have worked incredibly hard to save the adjoining properties. We are now in the process of dampening down the remains of the fire and will be on the scene for the coming hours."

Bourne added: "Whilst we understand that people need to get to work, Hyde Road from Devonshire Street to the Apollo roundabout remains closed towards Manchester, so we would urge people to avoid the area if at all possible."

Stockport Road is open, as well as the Hyde Road going towards Hyde.

At its peak, 12 fire engines were at the scene reduced to eight, along with the support of two aerial platforms at about 11:00pm.

At 9:00pm, the building is was declared unstable, meaning that crews had to tackle the blaze from outside whilst attempting to controlling the spread of the fire. The wind was also up at the time,  causing heavy smoke to blow towards the Longsight and Gorton areas of Manchester.

Over 50 firefighters from across Manchester, Salford and Stockport are battled the blaze on at different times during the night.

The building, a knitwear business was entirely engulfed and firefighters fought hard to prevent fire spreading to neighbouring premises.

At 7:00am on August 8, via Twitter, Greater Manchester Fire & Rescue reported 'our crews have been on Hyde Road at the fire in #Ardwick overnight. Now down to 4 fire engines and dampening down the building. Traffic update - Hyde Road  (Hyde to Manc only) remains closed between Apollo roundabout and Devonshire Street. Pls find alt routes.

Picture: The fire in Ardwick, Manchester.