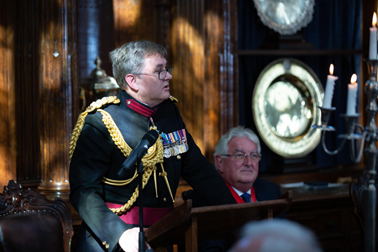 In a week (ending October 18) when the IWFM Awards' winners were announced, it seemed a good moment to look back at September's Worshipful Company of Environmental Cleaners Military Awards ceremony.

This year, the Master of the WCEC, Barrie Torbett, addressed the attendees and his speech focused on the long-standing relationship with Royal Army Medical Corp and environmental health sector. He specifically highlighted their outstanding achievements whether in service in the UK or overseas. He also commended the Cadet Corp for their outstanding achievements in training and discipline - making sure to point out the dedication of 17-year olds, already prepared and able to undertake exceptional leadership responsibilities.

Torbett ended by encouraging the WCEC to cultivate a close and solid relationship with the cadet corps and environmental staff, especially when they leave the services.

"The cleaning industry is actively looking for leaders of tomorrow and the military environmental staff have outstanding experience," he said.

The special guest of the event was Brigadier Tim Hodgetts CBE QHS OStJ.  Very highly regarded in the NHS and RAMC, Brigadier Hodgetts focused on the importance of the RAMC in conflict situations and post-conflict care. He expressed his appreciation of the connections with all the Livery Companies. He also praised the work of the cadet corps, training officers and young people who benefit, in particular the support of the WCEC.

The trophies, medals and purses awarded on the day included:

Cadet Aldred was also presented with a cheque for £2,500, representing funds raised by WCEC members to help pay for his overseas exchange to Borneo for jungle training.

If you would like to find out more about the Worshipful Company of Environmental Cleaners or their initiatives or events, Email clerk@wc-ec.com, t. 020 8224 6122 or visit www.wc-ec.com

FM’s contribution was celebrated at the annual IWFM Impact Awards 2021 in-person, for the first time since 2019. Healthcare, wellbeing and sustainability...

The winners of the annual IWFM Impact Awards have been announced at a ceremony at London’s JW Marriott Grosvenor House. Across the night, 74 finalists from 140...

GSH Group has won the Gold Award of Excellence in Facilities Management for 2020.  The award, presented by Global FM, the federation of facilities management...

Monday October 14 saw the winners of the IWFM Awards 2019 announced at the Grosvenor House Hotel in London's swanky Mayfair at a glittering evening hosted by star...

Major General Jeremy Rowan, Chair of the Regulatory Authority and an Honorary Liveryman of the Worshipful Company of Environmental Cleaners, outlines the contribution of...