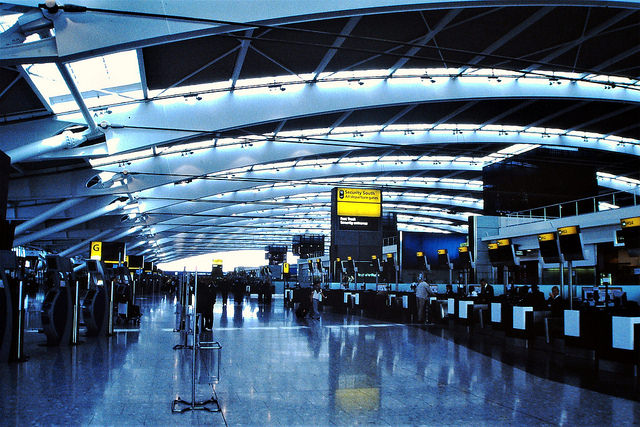 Mitie has been awarded the ex-Carillion FM contract at Heathrow Terminal 5. PLUS all the FM contract news from last week - Servest goes down the canal; Horbury healthy at NHS; Arcus in the aisles at Sainsbury's; Salisbury at Aylesbury; Wates Smartspace FM lands Horder Healthcare.

The contract is fully mobilised and went live on 1 February 2018 but was not announced officially until week ending Feb 22. The contract was agreed remarkably quickly following a competitive tender arising from the liquidation of Carillion. Of the 350 ex-Carillion staff, over 260 permanent members have been TUPE'd across to Mitie.

The team will provide flexible, round the clock cover and Mitie is to implement its Connected Workspace technology in the terminal to utilise data analytics to track and understand passenger movements in the terminal.

The UK's busiest airport welcomes over 200,000 passengers every day and handles 1,300 flights in any 24-hour period. Opened in 2008, Terminal 5 is the main hub for British Airways boasting a floorspace of more than 360,000 square meters as well as more than 100 shops and restaurants.

Mitie now provides services to four of the top five airports in the UK.    Phil Bentley, CEO of Mitie said: "Working in partnership with Heathrow Airport, the team have worked incredibly hard to mobilise this contract in a short space of time, offering a seamless service for passengers, and job security to ex-Carillion colleagues during an uncertain time."

The agreement will see Horbury Property Services as one of the partners to be able to provide general refurbishment and repairs services across a wide range of NHS buildings. The contract, which will cover Gloucestershire Royal Hospital and Cheltenham General Hospital, officially started in January 2018, with the option to extend the contract for two more years.

Terry Hull, Deputy Director of Estates for Gloucestershire Hospitals NHS Foundation Trust, said: “Keeping our building stock in good repair is vitally important and we are pleased to be able to proceed with the framework agreement with Horbury Property Services as one of our delivery partners.”

Richard Sutton, General Manager at Horbury said: “We’re pleased to have secured another major contract within the healthcare sector, following our recent framework agreement win with NHS SBS (Shared Business Services).  We demonstrated that we were able to offer a service that is very good value for money, as well as having the expertise to deliver high quality repair and refurbishment services.”

Arcus, has been awarded a seven year national contract to deliver mechanical and electrical services to Sainsbury’s.

The firm already provides bespoke FM services to the supermarket giant. It has secured the contract after a tender process. Arcus will now service the entire supermarket estate of more than 600 stores in addition to providing refrigeration services.

This latest announcement further builds upon the existing FM contract which has seen Arcus work with Sainsbury’s since 2009, with its current contract in place until 2026.

Danny Malyon at Sainsbury’s, said: “The award of this new contract is the result of a strong partnership. We have great confidence in Arcus. It is also a critical part of our strategy to become a leader in the use of technology/IOT in FM.”

Salisbury Group has secured a contract with Aylesbury Vale District Council which includes the provision of M&E and  planned & reactive maintenance services to all council sites and facilities across the Vale.

Salisbury Group a competitive tendering exercise. Its submission was praised for delivering value across a range of areas, as well as its cost effectiveness. The two organisations are now working closely together to mobilise the contract, with services due to commence on 1 April 2018.

The Council has the option to extend the contract by a further two years.

Wates Smartspace’s facilities management business has been appointed by healthcare provider Horder Healthcare to deliver a three year hard services contract across two of its medical centres and three outreach clinics in the south-east of England.

James Gregg, MD of Wates Smartspace FM, said: “Our extensive experience in delivering facilities management to a series of high profile customers across a variety of sectors means our teams both understand and embrace the unique challenges of our customers environments."

Servest goes down the Scottish Canal

As well as the waterways themselves, the Scottish Canals portfolio is made up of over 200 bridges, buildings and locks, The Falkirk Wheel, The Kelpies and 19 water supply reservoirs in locations across Scotland. The reservoirs cover an area equivalent to 7,494 football pitches and supply the canals with the 332 million litres of water, which flow through them each day. Formerly a division of British Waterways, it became a stand-alone public body of the Scottish Government on 2 July 2012.

The three year contract, which went live at the end of 2017, sees Servest look after the maintenance and mechanical and electrical provision across 120 buildings, including the administrative and forecourt properties. This vast collection of spaces, sees over 22 million visitors annually, to some of the more iconic monuments.

The Forth & Clyde, Union and Monkland canals in the Lowlands, the Crinan Canal in Argyll and the Caledonian Canal in the Highlands together extend over 137 miles from coast to coast, across country and into the cities of Edinburgh, Glasgow and Inverness.

Servest, which operates across the UK, has been keen to grow its customer base in Scotland since it acquired established Glasgow-based building services firm, Arthur McKay, in 2016.

FM company Mitie has been named as a supplier on the Crown Commercial Service (CCS) agreement for Building Cleaning Services. The CCS agreement allows public sector...

Mitie Care & Custody has been awarded a new contract by Merseyside Police, NHS England and NHS Improvement. The contract is to provide medical, liaison and...