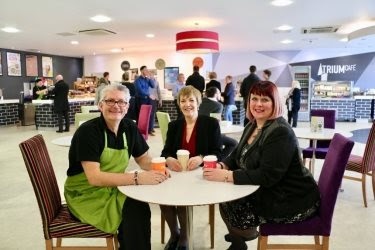 We've got contract gains and company purchases and news of Carillion FDs under investigation and another NHS Trust setting up its own FM co - FM Digesting at its best.

Proposals to set up a wholly-owned NHS subsidiary and to make a long-term investment in a facilities management company by Leicester NHS Trust have been approved by the Trust Board.

Chairman of the Trust, Karamjit Singh CBE, announced the proposal will enable investment in staff and services including improved cleaning and maintenance. The scheme will now move into its engagement phase before planned implementation on 1 October 2018.

The subsidiary will be registered at Companies House as the Leicester, Leicestershire and Rutland Healthcare Facilities Management Services LLP in the form of a Limited Liability Partnership. It will then deliver the whole range of estates and facilities and procurement and supplies services to 135 healthcare sites, including the three hospitals run by the Trust (Royal Infirmary, Glenfield and Leicester General).

This will see approximately 1,700 staff transferring into the LLP, with any new staff being employed on terms and conditions.

Mr Singh said: “This decision marks a significant step on the road to improving patient services provided by our estates, facilities, procurement and supplies teams. We want to be sure that this new structure will achieve our aims of improving the appearance and fabric of our hospitals, whilst also improving the wages of some of the lowest paid staff.”

“Having examined all the options at length, our view is that creating this Partnership will give us the financial freedom to invest in improvement whilst maintaining NHS-control of the service.”

The Financial Reporting Council (FRC) has commenced an investigation into the conduct of Mr Richard Adam and Mr Zafar Khan, former Group Finance Directors of Carillion.

The investigation is in relation to the preparation and approval of the financial statements of Carillion plc for the years ended 31 December 2014, 2015 and 2016, and the six months ended 30 June 2017 and the preparation and reporting of other financial information during the period 2014-2017.

The FRC is liaising closely with the Official Receiver, the Financial Conduct Authority, the Insolvency Service and The Pensions Regulator to ensure that there is a joined-up approach to the investigation of all matters arising from the collapse of Carillion.

BIFM and the Department for Work and Pensions (DWP) have refreshed their five-year old Partnership Agreement.

First established in 2013, the Agreement commits both organisations to co-operate to promote routes into the workplace and facilities management sector across the UK.

Interserve has delivered a second major project for the University of York, having completed the £27 million Piazza Learning Centre.

The scheme, designed by architects Race Cottam Associates and project managed by Faithful and Gould, is a key element in the University's development plan for Campus East. The landmark building is centred around a mature oak tree with expansive views across the lake.

The new building provides new teaching facilities with 36 flexible learning spaces that include two laboratories, as well as a 350-seat auditorium, 100-seat lecture room, a feature library, offices and a 300-seat restaurant, all spread across 6,800 square metres.

Interserve worked in collaboration with mechanical and electrical partner NG Bailey on the scheme.

Vinci UK said three projects had contributed to the losses last year, with the largest of these linked to its PFI contract to extend and operate Nottingham Tramlink, in which the group has a 12.5 per cent equity stake.

The company said that, excluding the tram scheme, the division made an operating profit of £1.2m.

Turnover for the civils division also fell by more than £60m to £205.4m for 2017. Vinci said the fall was due to larger projects reaching completion and being replaced by others that were in the early stages.

Lakeside North Harbour has selected Elior Group to operate its onsite café facilities as part of a five year contract.

Elior will manage the existing Atrium Café and open a newly designed café in Lakeside North Harbour's Winter Garden. The improved cafés will provide occupiers, staff and visitors with a range of food and drinks including an artisan coffee brand and street food style options which reflect contemporary demands, including the trend for healthy, seasonal and nutritious meals and snacks.

Elior won the contract following a process run by facilities management consultancy Neller Davies in which six organisations were invited to tender. The tender process included mystery shopping, market research, a Hospitality Focus group and an occupier feedback survey. Lakeside North Harbour was keen to ensure that its onsite cafes could meet the needs of its users with a particular focus on products that are considered healthy and nutritious - and ethically traded from sustainable sources.

Karen Tyrrell, Client & Communications Manager at Lakeside North Harbour, said: "It is important that our cafes offer a varied choice of high quality food and the breadth of Elior's ranges was impressive. We also loved the team's creative fresh new look for our existing café and design plans for the new Winter Garden café. A number of our occupiers also need an efficient and professional food ordering service for in-house meetings and corporate entertainment and Elior's online hospitality food ordering service, Spoonfed, meant we could meet this requirement too."

The Warwickshire based company will be rebranded as Vertas Environmental and will enhance other FM services the group offers, such as property management, security, contract catering and cleaning. MMB has already built up a client list, designing and operating bespoke waste solutions for Bannatyne Group, Global Exhibition Specialists and Zenith Contract Services.

Vertas provides catering for approximately 400 schools and since 2016 MMB has been converting the used cooking oil into biodiesel. It is envisaged that this biodiesel will stay within the group and be used to power grounds maintenance equipment such as lawnmowers and hedge trimmers.

This gives Mitie a 'hub of expertise' in the East Midlands area.

Mitie will provide medical support services across two custody suites in the county. A 24/7 team will operate at both the Bridewell and Mansfield sites, which combined, include over 100 custodial cells. The specialist Mitie team will provide clinical assessments, address the immediate health needs of detainees and provide patients with onward referral pathways for ongoing health and wellbeing following custody.

Mitie already delivers these services to thirteen police forces across the UK. These include six Sexual Assault Referral Centres and a Short Term Holding Facility in Northern Ireland.

Mitie’s specialist teams conduct over 180,000 medical interventions every year in 62 police custody facilities. This expertise was instrumental during the Nottinghamshire Police tender process, with scenario responses and the overall value of its proposition setting Mitie apart from the competition.

Bridewell Custody Inspector Dave Marsh, said: "The custody environment is one of the most challenging workplaces for healthcare professionals, police officers and staff. Although the award of the contract was heavily weighted towards quality rather than cost, Mitie Care & Custody proved to be competitively priced."

The new contract is scheduled to start in June 2018.