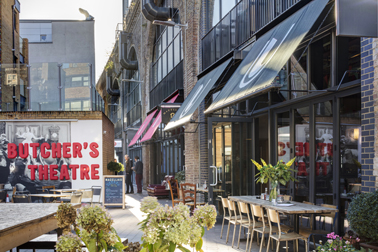 Network Rail agreed this week (ending Sept 14) to a £1.46 billion sale of its commercial estate to Telereal Trillium and Blackstone Property Partners.

The estate is made up of around 5,200 properties - many of which are small (such as below railway arches) but also include Grade A property such as the Old Union Yard, Southwark (pictured).

The sale is being billed as a way to  fund the railway upgrade plan.

Telereal and Blackstone will hold equal ownership stakes and intend to be long-term owners of the estate. Both parties have declared a ‘tenants first’ approach, cemented in a tenants’ charter, which offers a commitment to engage with all tenants and communities in an open and honest manner. Telereal will oversee the day-to-day property management of the portfolio.

Network Rail launched the sale of its commercial estate last November. The sites are being sold on a leasehold basis, with Network Rail retaining access rights for the future operation of the railway.

Cushman & Wakefield, Grant Mills Wood, Kirkland & Ellis and Gowling WLG acted as advisors to Telereal and Blackstone on the transaction.

Sir Peter Hendy CBE, Network Rail chair, said: “This has been a very thorough, detailed and complex process and we are pleased we’re now in a position to announce Telereal Trillium and Blackstone Property Partners as the new owners of the commercial estate. This deal is great news – for tenants it will mean significant commitment and investment, and for passengers and taxpayers it will mean massive, essential improvements without an extra burden on the public purse.”

Graham Edwards, co-founder and chairman of Telereal, said: “The arches portfolio is a unique and vital part of the UK economy featuring car mechanics, bakeries, micro-breweries, restaurants and just about every type of business you can think of."

David Biggs, managing director, Network Rail Property, told ThisWeekinFM: “Ultimately our role is to run, improve and grow the railway, and managing these properties isn’t essential to that. The new owners will invest in and grow the estate, and we can focus on our core business of running the railway.”

The entire Network Rail commercial estate is made up of around 7,500 properties. Properties in Scotland and those that have an ongoing requirement to support the running of the railway not included.

JCDecaux and Network Rail have signed a deal that will see the global outdoor advertising company deliver the world’s first digital-only transport environment, with the introduction of new digital screens.

The new contract begins in December 2018 and will provide Network Rail with significant income. It will also provide additional benefits for station users such as interactive information screens, providing passengers and their stations with better information about the station they are in and how to navigate it.

Since the partnership between Network Rail and JCDecaux began in 2010, it has introduced Europe’s largest indoor advertising screen at London Waterloo station, brought large full-motion screens to London Bridge and championed spectacular experiential campaigns, including the recent Jurassic World campaign at London King’s Cross station that featured a giant T-Rex on the concourse.