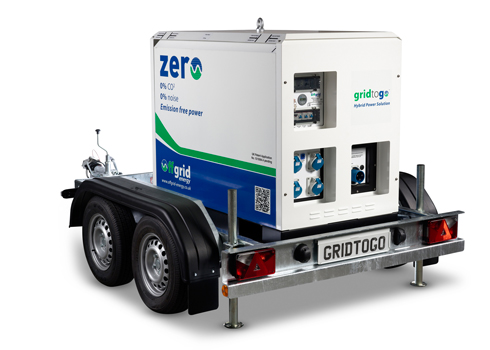 A new Universal Hybrid Power Unit was launched at this year’s Executive Hire Show on February 7 in Coventry.

Off Grid Energy, a manufacturer of power solutions for the construction, marine and automotive industries, launched its new Universal Hybrid Power Unit at this year’s Executive Hire Show on February 7 in Coventry.

The Gridtogo Ingenium Series is claimed to reduce generator running hours and allow for the use of smaller generators, which result in significant improvement in fuel efficiency and thus a substantial reduction in polluting emissions as well as noise pollution – all while cutting costs.

The Ingenium is designed and tested to withstand the rigours of the most demanding applications. It has been steelwork and lifting gear stress tested and built under military quality assurance standards to ensure that it is capable of being handled by any method, and fully compliant with Lifting Operations and Lifting Equipment Regulations.

“We developed the Ingenium series to be smarter, more powerful, more stable, more efficient, more robust and more resilient, whilst being both easier to use and integrate,” said Danny Jones, CEO at Off Grid Energy.

The Ingenium features V50 power battery technology and is offered either with single-string OPzV-S lead acid or Lithium-Ion battery technology. It also features an ESI touch interface with remote connection and trending display, as well as a Smart-Switch bypass for system flexibility and resilience to ensure power is never lost to the load.

The Ingenium series is available in models up to 90kVA and with battery capacities ranging between 60 and 180kWhrs.

At the exhibition, the company also showed a range of other Hybrid Power Units, including the Gridtogo Nano, a hand-portable unit offering an alternative to a petrol generator and both the single phase and three phase Gridtogo Powercube.

The real estate event, originally planned for March 10-13, has been rescheduled to summer 2020, due to growing concerns relating to the COVID-19 Virus. The announcement...

Keeping Track Of Workers On the Go

Ezitracker, the provider of workforce management solutions, has formed a strategic partnership with UTS Fleet, a camera, software and tracking specialist for business...