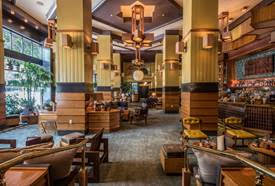 Queensgate Investments has acquired Freehand Hotels from a seller consortium including The Yucaipa Companies and Sydell Group for circa $400 million (£330 million).

Freehand Hotels is a US lifestyle hotels brand, owner and operator of hotel assets with circa 1,000 keys across four hotels in Manhattan, Miami Beach, Downtown Los Angeles and Chicago. Included in the acquisition is the award winning Broken Shaker bar concept.

Generator, a Queensgate owned company, will manage Freehand Hotels and retain the identity of the Freehand and Generator brands.

Puneet Kanuga, Investment Director at Queensgate Investments said: “The acquisition of Freehand is of strategic importance to Generator. The combined portfolio represents one of the largest asset-rich lifestyle hospitality platforms globally with 19 hotels in 17 gateway cities. There is now a significant push to grow the presence of both Freehand and Generator across the UK and Europe, with opportunities currently being evaluated in London, Edinburgh, Milan, Amsterdam and other gateway European cities.”

A new independent survey of more than 500 property investors has uncovered the UK’s top property investment hotspots for the coming year. London remains the...