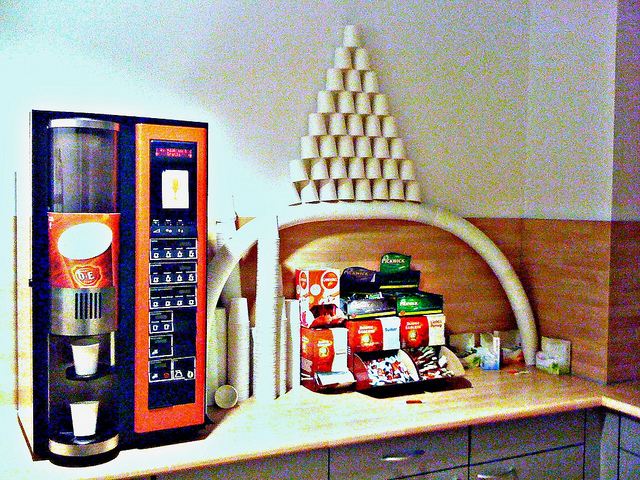 The use of disposable cups that are difficult to recycle and the lack of specialist reprocessing facilities in the UK results in fewer than 1 in 400 being recycled.

Most people still believe disposable & recyclable coffee cups are actually recycled - when the truth is they are not.

Coffee shops and other outlets, including those in office catering facilities, canteens and hospital cafes are communicating to customers that disposable cups are recyclable but it is not clear that they need to be disposed of through separate recycling systems. This confuses the consumer, resulting in the contamination of on-street and office bins and local authority collections as people dispose of disposable cups in mixed recycling.

It is unacceptable that coffee sellers are perpetuating customer confusion though their use of recycling labels and emphasis on the recyclability of coffee cups, despite the shockingly low recycling rate.

All of the above is paraphrased from the latest Joint Parliamentary Committee report in to disposable cup recycling (especially coffee cups). However, although the Committee had recommended a 25p levy be added to the cost of a Costa et al in January, the government weren't so keen and kicked the idea in to touch at the beginning of March.

The Committee was able to welcome the government’s commitment to explore reforms to the current UK’s producer responsibility schemes. Currently, taxpayers cover around 90% of the costs of packaging waste disposal. 'A different compliance fee structure would encourage the development of disposable cups which are easier to recycle', says a recommendation.

The Spring Statement included the announcement of an open consultation as to whether the the tax system can be used to reduce single-use plastic waste. For more details - Click Here