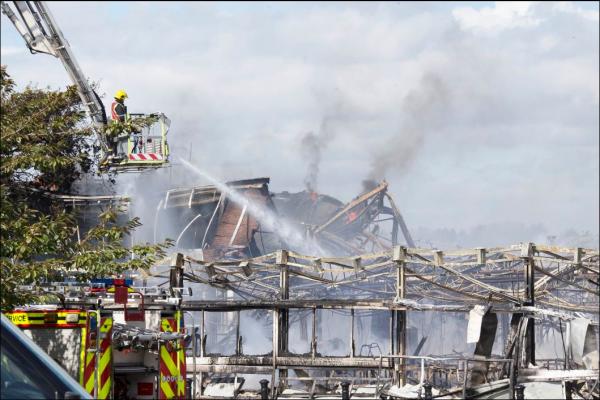 The massive blaze that destroyed the Selsey Academy at the weekend (morning of Sun 21) has now (Tues 23) been linked to roofing work that was taking place at the complex.

Despite the efforts of firefighters, large parts of the school have suffered extensive structural damage and much of its contents have been lost or destroyed, said West Sussex Fire and Rescue Services (WSFRS). A spokesperson took to Facebook to state: 'At this stage we believe the most likely cause of the fire was accidental ignition caused by a workman carrying out maintenance on the roof. There is no evidence to support online speculation that this was arson'.

West Sussex County Council and The Kemnal Academies Trust are now working together to make sure plans are in place for the start of the new term in September. West Sussex County Council Leader Louise Goldsmith said: “This was an extensive fire and we know that the level of damage has yet to be properly assessed, although we anticipate it will be severe. We will be working with the headteacher at Selsey Academy and the Kenmal Academies Trust to support pupils, parents and staff. Our top priority will be ensuring that pupils and parents know where they will be based from the start of the new school term in September.”

A spokesman for TKAT, the Trust which runs Selsey Academy, added: “Our priority is to ensure that the children of the Selsey Academy can return to school as soon as possible.”

Selsey Library, which sits alongside the Academy, was able to reopen on Monday 22 following a fire inspection.

At its height 14 fire engines, 2 aerial ladder platforms as well as a number of support vehicles were fighting the fire in strong winds, working in difficult conditions to create a fire break and save as much of the school as they possibly could.

WSFRS called on the support of crews (including relief) and appliances from fire stations around the county and also had support from appliances from Hampshire, East Sussex and Surrey FRS. The British Red Cross' Fire Emergency Support Service team also provided support. Two fire engines remained at the scene until Monday morning - the area having been declared safe after 11:13pm; the fire was first reported at 7:54am.

Three crews from Chichester, Selsey, and Bognor had arrived within minutes of each. They were confronted with a severe and rapidly developing roof fire which was being fanned by strong winds. Much of the central part of the school was quickly involved with a large plume of dense smoke blowing across Selsey resulting in burning embers falling on adjacent buildings including two thatched properties. These were protected by firefighters spraying them with compressed air foam to prevent the thatch igniting.