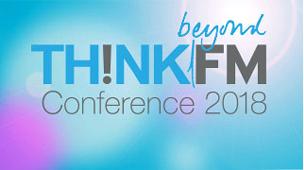 May 1's Think (Beyond) FM was not a bad iteration of the long running yearly BIFM conference. It focused attention on the topic of workplace with tones of gerrymandering a vote on changing from BIFM to IFWM, writes attendee Brian Shillibeer, ThisWeekinFM's Chief Correspondent.

However, in my opinion, the  speakers, who generally were very, very good, were able to express the synergies of running an efficient building (FM) to the benefit of worker' wellbeing and productivity (HR) but left the idea of collaboration between the disciplines on the same wish list they've been on for donkey's years.

Fortunately the conference did not abandon the engineering principles that underpin FM. There was a fabulous session on education (MSc in FM) which included digital research that has led to more advanced heat and vibration monitoring of building assets. These allow heat to be an indicator of vibration and thus fault prediction which in turn allows accurately targeted maintenance or replacement whilst keeping the energy bills down.

Workplace may be the key to positioning yourself as a contributor of value rather than a cost centre - and putting yourself in front of the board of directors (that hoary old chestnut has been riding the same donkey as that workplace conundrum for far too long). This was the theme of the closing sessions.

All the way from America

I have to say Colleen Conklin, Director of Research at Sodexo's view of the emotionally intelligent workplace (one of seven trends driving organisational and workplace change apparently) having an impact on how people work. was illuminating - but the body language of the audience suggested that the majority do not work for Google or Microsoft and thus were putting her suggestions on that wish list. Although Conkin did hit on one idea that made people sit up and listen - fresh air. She asked: "Why do you think casinos pump clean, cool, fresh air in to their properties?" It's not out of the kindness of their hearts - they want alertness...and their guests gambling not snoozing was the answer that made absolute and simple sense.

Simplicity was an idea the audience seemed more in tune with - but speakers continued with more complicated scenarios.

Despina Katsikakis, Head of Occupier Business Performance, Cushman and Wakefield again moved to the productivity theme, recognising again that the workplace can have a positive or a negative impact on people and business performance, While Emer Lynam and Namrata Krishna, Senior Workplace Consultants, Gensler spoke again on the importance of workplace design in workforce engagement.

Here we are in a fabulous place

Chris Moriarty, Director of Insight, BIFM then banged that gerrymandering drum a little more loudly in his declaration that the  workplace opportunity is something that cannot be ignored.

The opening conference session (there were breakout How To units running separately) saw Vicky Pryce, Economist, Centre for Economics and Business Research covering the economic shocks that FM professionals will be facing in the coming years. The promo blurb for her appearance said she would explore changes to outsourcing and PFIs - but this did not happen to any real effect.

Cathy Newman, the Channel 4/ITN presenter who played host to the whole day (within the main conference area) did a splendid job of keeping everything to time and asking pertinent questions of the speakers and panel guests.

The first panel up was constituted of Jeremy Waud, Chairman, Incentive FM, Ed Hudson, Regional Head of FM, UBS and George McFarlane, Director of Sector Development at the CBI. McFarlane asked is public procurement broken and what is the future for PFI? Waud claimed competing is good but we don’t have to race to the bottom; and Hudson gave a client’s view (a very positive client's view) of outsourcing. They were joined by former Mitieite Ruby Mcgregor-Smith and Paul Lester, Chairman, CBE for a panel debate that showed both sympathy and a lack of it for SMEs (Waud being the least sympathetic to the idea SMEs a lulled in to bidding for work they will never win - don't bid was his answer). All agreed FM should work symbiotically - long contracts (if not permanent contracts) where the service provider is incentivised to invest because they are sure to get their investment money back. You'd have thought they were almost on the cusp of advocating insourcing...but with private companies at the helm.

Note: Symbiotic - where both entities benefit. Parasitic - where only one benefits to the detriment of the other.

There was a bit of Big data, artificial intelligence and automation; analytical tools and smart applications; empowering employees through technology and a case study of the Burj Khalfia.

David D’Souza, Head of Engagement, CIPD gave one of the most entertaining presentations when he asked and answered will automation and machine learning impact on the workplace and how should FMs deal with the ethical questions thrown up by the connected workplace?

He also crystallised something very important - he comes from an HR world and a membership organisation of 145,000. BIFM would like a slice of those numbers - but those numbers already know about people and workplace...but are still struggling to grasp where FM fits in.

Picture: The Think (Beyond) FM conference was a thoroughly interesting affair with plenty that can be implemented - and a considerable amount that needs to be thunk about.

Is it time you thought about booking your ticket for BIFM's ThinkFM conference which the Institute claims will help you prepare for the next two years? The BIFM...

The programme for the BIFM London Conference is available, with the last few tickets available for the event on March 5 at the Institution of Engineering and Technology,...

Here's to the Future Now It's Only Just Begun

Global FM, the alliance for facilities management associations worldwide, has announced May 17 2017 as the date for the next World FM Day. Each year, World FM Day...

Details have been announced for this year’s flagship WorkTech London conference that takes place at the Queen Elizabeth Hall, Southbank Centre on November...