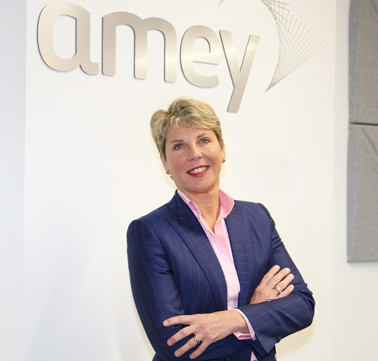 December 10 saw Amey announce that Amanda Fisher has been crowned as Acting CEO. She is the current MD of the Facilities Management, Defence and Justice Business at Amey.

Fisher will replace Andy Milner with immediate effect, who is leaving the company after a long career and almost four years in the role of Chief Executive.

Fisher joined Amey in 2017. Previously, she held several senior operational and leadership positions across a number of sectors, including the wider FM market, business services and highways, in companies such as Balfour Beatty, Alfred McAlpine and Allied Healthcare. Prior to this, Fisher trained at Sandhurst and served as a commissioned officer in the army.

Amey has a turnover of £2.2 billion and employs 17,000 people internationally with a focus on the UK, but with businesses in Australia and America. Like a number of its similar sized counterparts, Amey has struggled in recent years to turn turnover into profit. It is rumoured that the company will divest itself of some of its businesses to achieve leanness.

Amey operates in the utilities, transport, engineering, environmental, waste services, and facilities management markets, along with a consulting and asset management arm.

Amey is owned by Ferrovial, are one of the world’s largest infrastructure management and investment companies. Ferrovial has more than 96,000 employees and a presence in over 15 countries. It is a member of Spain’s blue-chip IBEX 35 index.

"Through her extraordinary results since joining Amey, Amanda has demonstrated her undoubted ability to assume the position of Chief Executive,” said Fidel López Soria, CEO of Ferrovial Services.

“I would like to thank Andy for his dedication and commitment throughout his career in Amey and Ferrovial, and particularly for navigating the business through some very challenging years within our sector."

Speaking on her appointment, Fisher said: “I have been offered the role to lead Amey through what is both an exciting but demanding time for our industry. Recently the business has overcome many challenges. My focus will be on ensuring we build on this, readying ourselves for the next phase, delivering what our clients and the communities we serve need.”

Amey’s Secure Infrastructure business is to introduce a fully sustainable cleaning solution across its FM operations.   The new cleaning model will...

Amey has secured a deal to provide facilities and estate management services across Highways England’s operational estate. The five-year contract will commence...