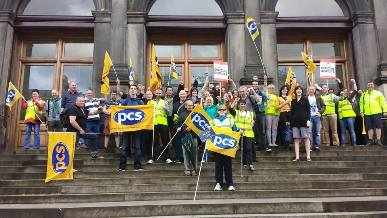 The bitter dispute over weekend working conditions for new members has led to a walk out by PCS staff at Scottish Museums.

The point at issue that centres on staff hired after 2011 not getting weekend payments, has seen an entrenchment of views by the management of National Museums Scotland (NMS) and the Public and Commercial Services union (PCS).

Approximately 60 members of National Museums Scotland branch or half the total PCS membership have been on the picket lines this morning as part of their campaign.

The strike started on Monday, 24 August until Sunday, 30 August and will affect those who are visiting during the Edinburgh Festival when many

The management has made a lengthy rebuttal of the claims made by the union side, stating that it was “regrettable” that the PCS had decided on industrial action during the festival but that there would be partial openings of some of the buildings.

The statement went on to note that the continuing dispute was after management had made a number of proposals but had been rejected by the PCS without a vote being taken. On the vexed question of weekend allowances, the management was explicit in making it clear that “weekend payments are no longer common in the culture and tourism sector across the UK, including Historic Scotland, Visit Scotland and the National Trust for Scotland”.

Due to the financial crisis, it had introduced revised contracts for new staff in 2011 which do not include weekend working allowances. “To introduce weekend payments for staff who have been employed since 2011 would cost an additional £400,000 per year. In the current public sector funding climate this is unaffordable,” the statement concluded.

Picture: Standing together – members of the PCS were out picketing NMS buildings at the start of action this week over weekend allowances not being paid to staff joining after 2011