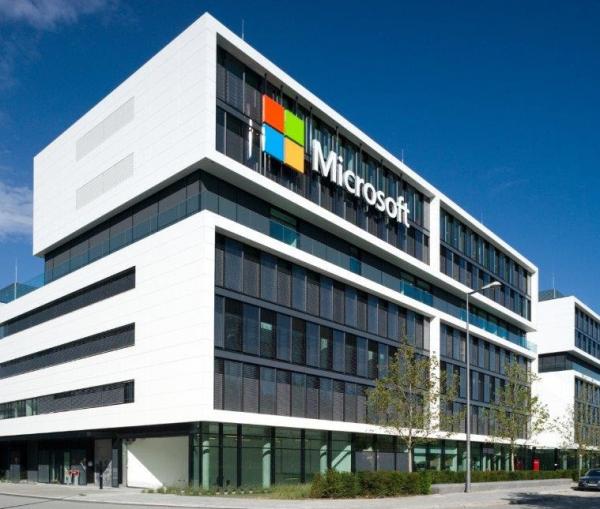 Opened in October 2016, the modern office building is the ideal venue for hosting contemporary work solutions. Its layout adheres to all the relevant criteria Microsoft expects in an open and flexible workspace.

The building, in Parkstadt Schwabing in the north of Munich, is enveloped in Corian design surface and features an unusual depth when illuminated by the sun. It was designed by GSP Architekten of Munich It consists of a staggered building structure with numerous plant-covered terraces and courtyards bathed in natural light.

Its open campus layout and ambiance captivates not only the 1,900 employees but also its neighbours. Laid out over seven floors, the 26,000sq.m space allows employees to decide when, where and how they carry out their work. Four different types of workspace are found in the building, each taking into consideration the varying work demands of staff.

The building’s exterior is characterised by its prominent white facade. “The most important criteria for choosing Corian for the building envelope was the smooth, homogeneous external image we were able to achieve. The look is especially fascinating when illuminated by the sun,” explains Ingo Schäfer from GSP Architekten. “As an additional advantage, the smooth, non-porous surface has a self-cleaning effect.”

The pre-fabricated panels and shaped components were delivered according to a strict time schedule. Technically speaking, this is a ventilated, rainscreen mounted facade with undercut anchors fastened to the back of the panels. They carry the dead weight as well as all the other forces involved with the exterior wall thanks to a sophisticated rail and hook system.

Since 1970, the architects at GSP have been designing projects for a variety of sectors. In addition to premium office space and corporate buildings, they work on retail, hotel and residential buildings. Urban design concepts for rural and urban areas are just as much a part of their portfolio.

Bosco Verticale has been described as a model of vertical densification of nature within the city and it is causing a stir as to its viability. The 'bioclimatic'...