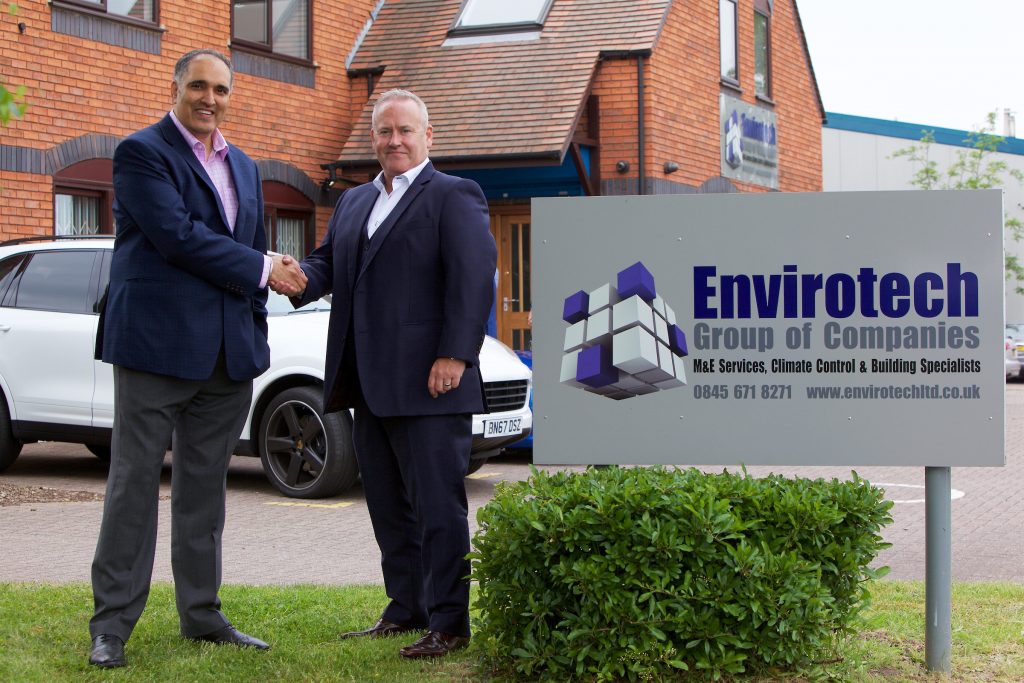 The Envirotech Group of companies have announced the latest addition to the engineering and building services business with the launch of a new facilities management brand EnvirotechFM.

The Envirotech Group has grown since trading began in 2008. Originating as a mechanical specialist company, Envirotech Building Services and since moving into the electrical, construction and climate control markets.

Group Chairman, Paul Harrison said:. “We’ve steadily evolved over the years and I can see us continuing this expansion of services and where possible, to self perform and take accountability for works on behalf of our clients. We are now able to offer a multi-faceted service with each element of the Group complementing each other.”

The three-year contract is an extension of services already provided by Mitie, to include additional sites in the Midlands, Wales and the South - almost doubling the number of sites on the contract.

Mitie will be investing in new technology as part of the contract, having developed a web portal called Live Landscapes that will provide live data and management information across the estate. This will allow Whitbread to monitor performance by site as well as download reports containing issues, trends and other key data.

Sodexo has won an £11.2 million contract with Tyne Coast College Group across six sites in North and South Shields.

The 8-year contract will see Sodexo supply a combination of catering and student accommodation services.

This builds on a six year relationship with South Tyneside College, one of the institutions in the newly formed group. Through the new contract Sodexo will supply three further education college sites, South Tyneside College, South Shields Marine School and Queen Alexandria Campus, which have 15,000 full and part-time students in total, in addition to Ridgeway Primary Academy.

Sodexo will invest in new retail and dining facilities and has devised a food and beverage offer to suit the 12 retail, grab-and-go and refectory outlets across the sites.

Sodexo marked World Environment Day (June 5) with the publication of its environmental commitments.

Rachael Mason, Environmental Manager for Sodexo UK & Ireland said: “It has become very clear to us that our clients want a better understanding of the environmental elements of our corporate responsibility strategy, so we set out to create one document that explained our approach, commitments, targets and actions taken in a clear and simple way.

“Not only is the management of our environmental impact important but it was also clear that we needed to clarify the relevant targets and commitments within our Better Tomorrow 2025 roadmap for them to have relevance to our clients, to support their own corporate responsibility goals.”

Through Better Tomorrow 2025, Sodexo sets out the following environmental commitments:

Last month Sodexo banned the purchase of plastic straws and stirrers and made the commitment to phase out single use plastic bags and polystyrene items such as cups, lids and food containers by 2020.

Emcor UK will be presented with four RoSPA Gold Awards in the internationally recognised 2018 RoSPA Health & Safety Award event in London on July 4.

Additionally, RoSPA will present a fifth Gold Award to Emcor  - the prestigious Gold Medal Award, in recognition of the company receiving seven Gold Awards in seven years for its health and safety practices.

The Awards recognise an organisation that has achieved a high level of performance, whilst demonstrating well developed occupational health and safety management systems and culture, outstanding control of risk, and low levels of error, harm and loss.

Julia Small, RoSPA’s head of qualifications, awards and events, said: “The RoSPA Awards are the most highly-respected in the health and safety arena, with almost 2,000 entrants every year, and allow organisations to prove excellence in the workplace, demonstrating a commitment to the wellbeing of not only employees but all those who interact with it.”

Engie, has bought the Langa Group which is based in Brittany and is one of the most active independent producers of renewable energy, simultaneously present in solar, wind, biogas and biomass.

Langa is involved in the entire value chain of its projects. It holds a portfolio in operation which by the end of 2018 is set to reach an installed capacity of 215 MW of which 165 MW in solar energy and 39 MW in wind energy. The group is also developing 1.3 GW of projects due to be completed by 2022.

Gwenaelle Huet, CEO of Engie France Renewables, said: “Engie and Langa are among the leading French companies developing solar energy. The alliance of the two Groups and in particular the specific skills of Langa teams on roofs and ground-based power plants, as well as the general portfolio of projects being developed, will incontestably make Engie a leader of the sector in the country.”

Picture: The Envirotech Group has launched a new FM business.