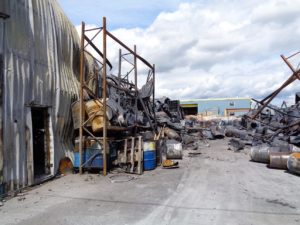 Just before Christmas, a chemical company (LMA Services Ltd) was sentenced for breaches that led to a fire. Meanwhile, a fall from height has cost Sir Robert McAlpine nearly £300,000.

Leeds Magistrates’ Court heard that on 30 June 2016, the fire started during a chemical dispensing operation in a Warehouse on Halifax Way, Pocklington Industrial Estate, Pocklington. Heptane, a highly flammable liquid, was being decanted from a bulk storage container into 4-litre metal cans. The operator dropped the can he was filling, exited the warehouse quickly and raised the alarm. He did not suffer any serious injury. The fire spread quickly and destroyed the warehouse, the adjacent warehouse and an external storage area between the two.

An investigation by the Health and Safety Executive found that the process involved placing a bulk container of heptane onto racking at a height of about 1.5m. A table was then positioned beneath the bulk container onto which a small electrical weighing scale was positioned. Metal cans were placed onto the scale and an employee filled the cans by weight by manually operating a tap on the bulk container in the warehouse building.

A flammable vapour created during the process came into contact with an ignition source causing the vapour to ignite. HSE’s investigation found that the most likely source of ignition was a spark from the electrical weighing scales.

LMA Services pleaded guilty to breaching Regulation 6 (3) of the Dangerous Substances and Explosive Atmospheres Regulations 2002. The company was fined £14,000 and ordered to pay £2,377 in costs.

After the hearing, HSE inspector Dave Stewart said: “The risks associated with the decanting operation were not fully understood by the company. There were potential ignition sources present within the area where a flammable vapour was likely to occur.

Construction company, Sir Robert McAlpine Ltd was sentenced for safety breaches after a worker fell 4.8 metres through an unprotected opening.

Leeds Magistrates’ Court heard how, on 28 April 2016, the worker aged 36, was working at Stone Gappe Hall, Lothersdale, Keighley, owned by Richard McAlpine, a director of the McAlpine group of companies. The employee was attaching straps to a water tank whilst preparing to move it to a lower floor of a water tower at the property, in order to paint the floor.

An investigation by the HSE found that the man fell through an opening that did not have fixed edge protection. As a result, he sustained serious injuries including a right tibial shaft fracture, a distal fibular fracture, a fracture to the left patella, orbital and nasal fractures, lacerations to the face, a concessional head injury and an injury to his ribs. He was hospitalised for nine days, continues to suffer from psychological damage and has been unable to return to work.

After the hearing, HSE inspector Paul Thompson said: “Falls from height often result in life-changing or fatal injuries. In most cases, these incidents are needless and could be prevented by properly planning of the work to ensure that effective preventative and protective measures are in place such as edge protection or barriers built to the correct standard.

“This incident could have easily been prevented if the company had undertaken a thorough risk assessment and installed adequate edge protection around the opening to prevent falls.”

Picture: The result of the chemical fire in Pocklington.