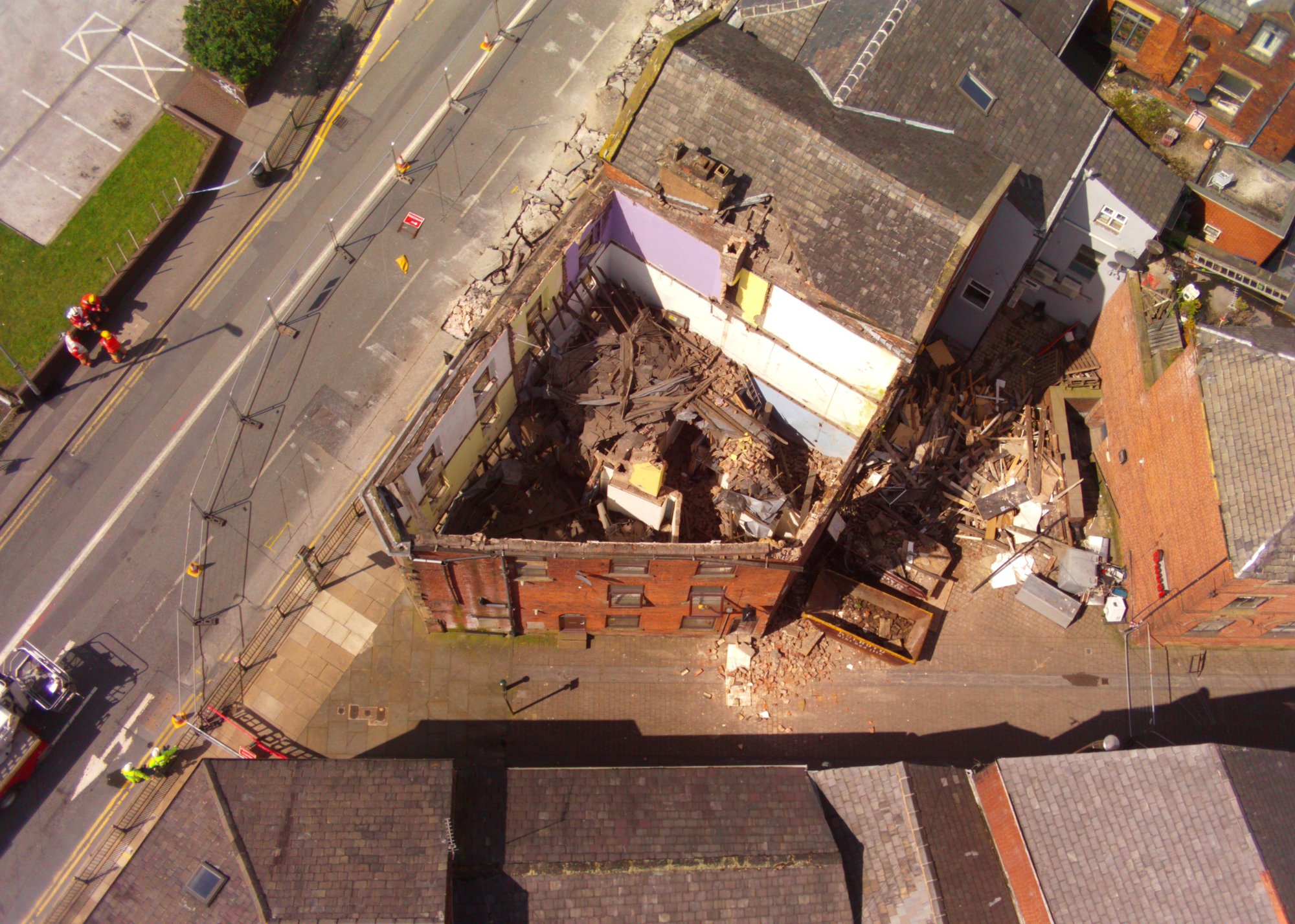 July 20 saw a Manchester property developer sentenced after the roof and part of the rear wall collapsed at one of his commercial properties during demolition works.

Manchester Crown Court heard how Riaz Ahmad appointed a group of workers, who had no experience in construction, to carry out demolition work at a property in Oldham. On 11 August 2017, after receiving a call from Oldham Metropolitan Borough Council’s building control department, an HSE inspector visited the site and found almost all the internal walls and supports of the roof had been taken out. A Prohibition Notice was served preventing any further work and a major road running past the building was closed.

A day later, it was agreed that there was no safe way of accessing the building and Oldham MBC obtained an order to demolish the building. It was soon after this that the roof and wall collapsed. This triggered an emergency response involving Greater Manchester Police and the Fire Service, during which properties were evacuated and the area cordoned off.

Oldham Borough Council arranged for an emergency demolition of the remainder of building to take place later that day. Local businesses faced significant disruption as the site was made safe.

An investigation by the HSE found the collapse could have been prevented had a principal contractor been appointed and a suitable risk assessment been carried out. These steps could have ensured the stability of the building during the demolition with regards to temporary works and control measures such as scaffolding. Mr Ahmad did not suitably plan the work as he employed unskilled workers, neglected the risks from working at height and stability of the building, failed to provide them with basic welfare facilities and did not consider several health hazards.

Riaz Ahmad was found guilty of breaching Section 2 (1) and Section 3 (1) of the Health and Safety at Work Act 1974 and Regulation 19 (1) of the Construction (Design and Management) Regulations 2015. He was sentenced to eight months imprisonment for each offence (to run concurrently) and was ordered to pay prosecution costs of £65,000.

In his sentencing of Mr Ahmad, the Judge remarked that: "This was a very serious case indeed. It was nothing short of a miracle that only one person was injured. A clear statement has to be made to those who undertake significant projects such as this, namely that health and safety legislation has to be adhered to for good reason, and those who ignore its basic tenets will receive punishment."

Speaking after the hearing, HSE inspector David Argument said: “The incident could so easily have been avoided by simply carrying out correct control measures and safe working practices. Duty holders should be aware that HSE will not hesitate to take appropriate enforcement action against those that fall below the required standards.”

A contractor, client and director have been convicted after dangerous building site conditions were discovered; and a property developer has been sentenced after the roof and part of the rear wall collapsed during demolition works.

On July 17, Southwark Crown Court heard that inspectors from the Health and Safety Executive visited a construction site on Gladesmore Road, London on numerous occasions in 2015 while building work was taking place at the commercial property.

Inspectors found poor health and safety conditions on site including dangerous work at height, unshored excavations and poor welfare facilities. This resulted in numerous prohibition notices, improvement notices and notifications of contravention being served on the contractor and client.

An HSE investigation found that the contractor, Mr Bodnariu, failed to plan, manage and monitor the work on site. The client company WEL Estates Limited failed to make suitable arrangements for managing a project, and the director of WEL Estates Limited, Mr Yoel Lew, had allowed the poor conditions on site.

Mr Bodnariu pleaded guilty to breaching regulation 15(2) of the Construction (Design and Management) Regulations 2015, and was sentenced to eight months imprisonment, suspended for 12 months, 250 hours of community service, and ordered to pay costs of £1,000.

WEL Estates Limited was found guilty of breaching Regulations 4(1) of the Construction (Design and Management) Regulations 2015, and was fined £20,000 and ordered to pay costs of £5,000.

Mr Yoel Lew was found guilty of breaching Section 37(1) of the Health & Safety at Work etc. Act 1974 and sentenced to 200 hours of Community Service.

Picture: The collapsed building in Oldham.