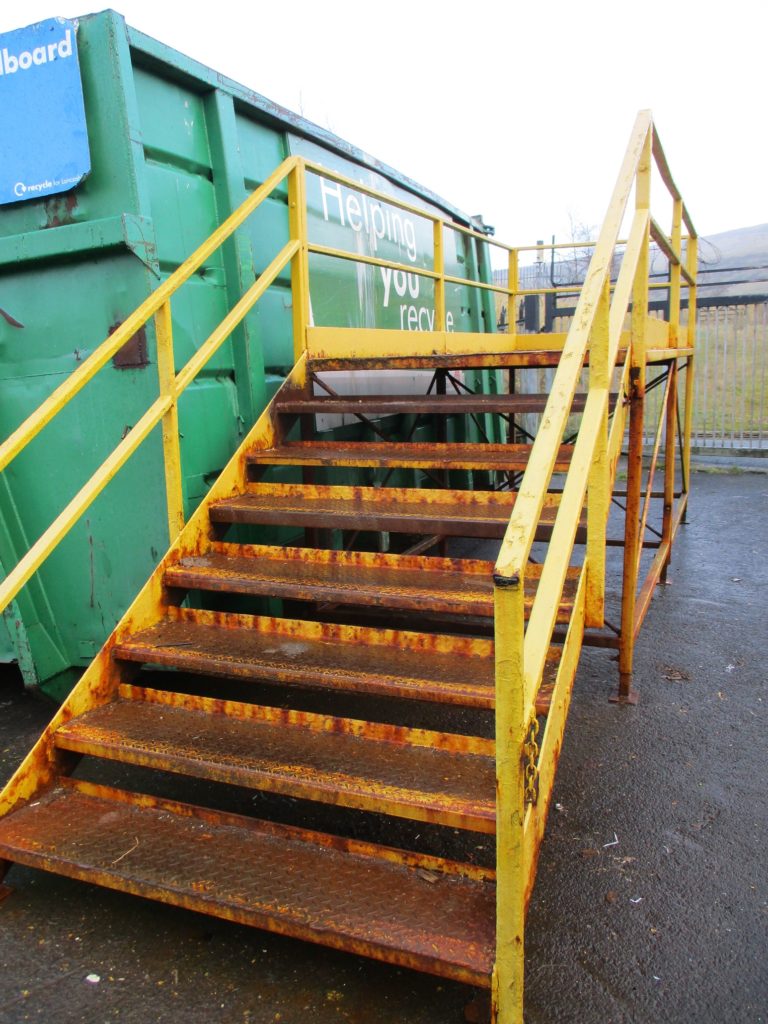 A company in the recycling sector has been fined over a manual handling of loads issue and two other firms in the same business have been fined for separate fatalities.

In the first case a man suffered from a back injury after manually moving gantry steps. Preston Crown Court heard how on, 10 September 2016, an employee of Suez Recycling and Recovery Limited helped to manually move steps weighting in excess of 950kg at a site in Duckworth Clough, Haslingden, after repair works had taken place. As a result of this work, the employee sustained a back injury.

An investigation by the Health and Safety Executive found manually moving and realigning steps was a regular occurrence and that employees would use a scaffold pole under the steps to move them back into position. Senior staff knew how the steps were moved and that employees had concerns, as it had been reported, yet no suitable assessment had been carried out or safe system of work implemented, to avoid hazardous handling. No equipment or handling aids had been considered to help employees manoeuvre the gantry steps.

Speaking after the hearing, HSE inspector Sharon Butler said: “Incorrect manual handling is one of the most common causes of injury at work. Those in control of work have a responsibility to devise safe methods of working and to provide the necessary equipment, information, instruction and training to their workers. If a suitable safe system of work had been in place prior to the incident, the injuries sustained by the employee could have been prevented.”

Sanders Plant and Waste Management Limited have been fined after an employee was fatally injured when he was struck by a reversing JCB loading shovel.

Newcastle upon Tyne Crown Court heard that, on 15th June 2015, a wheeled front-loading shovel was being operated in the main waste processing shed at the company’s waste recycling facility in Morpeth. The vehicle, driven by another employee, was loading waste into both a trommel (a large waste separation and sifting machine) and a parked haulage vehicle. During the course of this operation the vehicle struck a site operative, Mr George Richardson. Mr Richardson was fatally injured and died at the scene from his injuries.

An investigation by the HSE found evidence of a lack of pedestrian and vehicle segregation in the waste shed meaning that pedestrians and vehicles could not circulate in a safe manner. The company had carried out a risk assessment prior to the incident that identified some control measures to reduce the risks from operating the loading shovel and a fork lift truck on site. However, these control measures had not been fully implemented nor were they sufficient to manage the risk of collision between vehicles and pedestrians. There was also no risk assessment or traffic management plan considering the safe movement of vehicles across the site.

After the hearing, HSE inspector Laura Catterall said: “The HSE investigation found an inadequate assessment of the risks of vehicle movements in the waste shed and a lack of segregation of vehicles and pedestrians. There are more than 5,000 accidents involving transport in the workplace every year. As in this case, sadly, some are fatal.

“A properly implemented transport risk assessment should have identified sufficient measures to segregate people and vehicles and provide safe facilities.”

Kerry Richardson speaking on behalf of the Richardson family also said: “More than anything my whole family don’t want anyone else to lose their life and another family to go through what my family has gone through and is still going through.”

A Liverpool recycling company has been sentenced after one of their employees, Paul Andrews, was fatally crushed by falling plastic bales.

Liverpool Crown Court heard how, on 24 May 2017, waste plastic bales had been delivered to Centriforce Products Limited’s site at Derby Road, Liverpool and were stacked as free-standing columns in a yard. During the morning, a fork lift truck driver noticed one of the columns consisting of bales, stacked three high, had partially collapsed obstructing his path. He subsequently used the fork lift truck to straighten and stabilise the stack before continuing on his way.

Some hours later Paul Andrews was working in the immediate vicinity of the stack when it toppled, with the middle and top bales, weighing over 500 kg, falling and crushing him. The scene of the collapse was not discovered until nearly an hour later when efforts to revive him failed.

An investigation by the HSE found Centriforce Products had failed to store waste plastic bales securely in such a way as to prevent the risk of collapse. The company had also failed to carry out a suitable assessment which would have identified risks to the safety of employees located within the danger zone of unstable stacks.

Speaking after the hearing, HSE inspector Rohan Lye said: “This appalling incident could so easily have been prevented if Paul’s employer had acted to identify and manage the risks involved and put a safe system of work in place. Their failure to do so has left his wife without her husband and two daughters without their father.”

Picture: A man was injured when he manually moved steps weighting in excess of 950kg at a recycling plant.