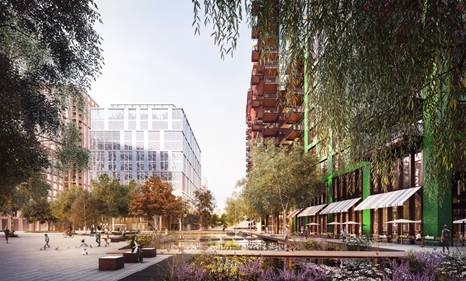 DK, one of the world's biggest illustrated reference publishers, will relocate to One Embassy Gardens taking three floors of prime office space with a combined size of 44,000sq.ft in the same location as sister company, Penguin Random House UK.

DK will move from their 80 Strand office by 2020 to the Ballymore development with views over the River Thames, Linear Park and new US Embassy building and with emerging housing and retail.

Apple is expected to unveil its new London headquarters within the Nine Elms regeneration area imminently, while a host of other businesses have taken advantage of the district’s new appeal.

London Underground’s Northern Line extension will see the creation of two new stations at Nine Elms and nearby Battersea Power Station, dramatically improving transport connections to central London and beyond.

John Mulryan of Ballymore, said: “DK’s relocation to One Embassy Gardens is a great testament to Nine Elms’ remarkable transformation. Their move, in conjunction with Penguin Random House, will create a new media and publishing hub for London.”

Picture: - DK is to join Penguin at the Nine Elms media hub.