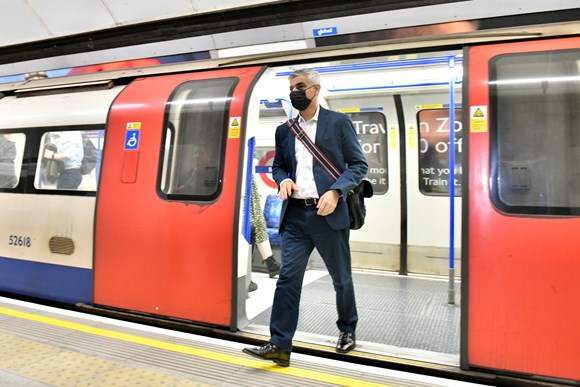 The Mayor of London, Sadiq Khan, re-opened the Bank branch of the Northern line on Monday 16 May, following a 17-week planned closure. The closure enabled around 550 construction staff to work around the clock to finish constructing a brand-new Northern line tunnel and passenger concourse at Bank Underground station.

Bank station will see its capacity increase by 40 per cent when upgrade work finishes later this year, with improvements still to come including step-free access to the Northern line, improved access to the DLR platforms, two new moving walkways, 12 new escalators and two new lifts. There will also be more direct routes within the station and a new station entrance on Cannon Street.

"The Northern line has fully reopened to customers, on-schedule and to budget, after the successful completion of the latest phase of vital upgrade works at Bank station."

These improvements to Bank station will support the recovery, growth and success of the City of London, addressing long-standing capacity issues and making journeys through Bank quicker, easier, and more comfortable when fully complete.

Around 650 train drivers and more than 100 station staff have taken part in exercises to familiarise themselves with the new tunnel and vastly improved station layout. Northern line customers using Bank station from today should follow the new signage and directions from London Underground staff.

Only the First Planned Transport Milestone

The Mayor of London, Sadiq Khan, said: “Today marks the first in a series of transport milestones for our city. The Northern line has fully reopened to customers, on-schedule and to budget, after the successful completion of the latest phase of vital upgrade works at Bank station.

“Bank Station is at the heart of the city and these improvements are the first step towards a modern, accessible, easy to navigate station fit for the twenty-first century.

“We are at a pivotal moment in London’s recovery, and it’s clearer than ever the critical role TfL plays in boosting our economy. It is time that the Government finally accepts that a properly funded transport network in London is an issue of great national importance. Ministers must commit to a long-term funding deal that will protect the capital’s world-class transport network and support jobs and growth in London and across the whole country.”

Wayfinding at Bank station is being improved to make it easier and more intuitive to navigate around the station. Improvements include installing new signage and contrast cladding between interchange corridors and platforms. A new platform hump has been installed on the northbound Northern line platform and the newly constructed southbound Northern line platform has been raised to provide level access between the train and the platform.

Shravan Joshi, City of London Corporation Planning and Transportation Committee Chairman, said: “Today’s re-opening of the Northern line’s Bank branch is fantastic news for the Square Mile as our sustainable recovery from the pandemic continues with offices thriving alongside our cultural, retail and hospitality scene. It is encouraging to see commuter numbers continuing to pick up the pace, demonstrating the City’s enduring power as a world-leading place to do business, as well as an attractive place to invest, work, live, learn and visit. We very much look forward to the completion of the transformation of Bank station which will see this vital City commuter hub renewed and made more accessible for workers, residents and visitors.”

Andrew Corrigan, General Manager, The Royal Exchange, said: “The Royal Exchange team is delighted that the Bank branch of the Northern line has re-opened today, and customers will benefit from the upgrades to Bank station as well. It has been exciting to see workers, residents and visitors enjoying the City once again after the lockdown restrictions, and this will make their journeys easier. The Royal Exchange is one of London’s most iconic buildings, located in the heart of the City, and home to some of the world’s most coveted brands that embody quality, style and heritage, so we are pleased that these upgrades will allow us to welcome more people through our doors to enjoy the landmark building.”

During the closure of the Bank branch of the Northern line, essential work was also carried out at other stations including London Bridge, Borough and Elephant & Castle so that future disruption to customers would be minimised. This included work on lifts and escalators, refurbishment work at Borough, and enabling works for the future Elephant & Castle station upgrade.

Crossrail services on the new Elizabeth Line are set to open on Tuesday 24 May 2022. The new railway will connect stations such as Paddington to Canary Wharf in only 17 minutes. This journey currently takes more than 30 minutes to complete using the tube.