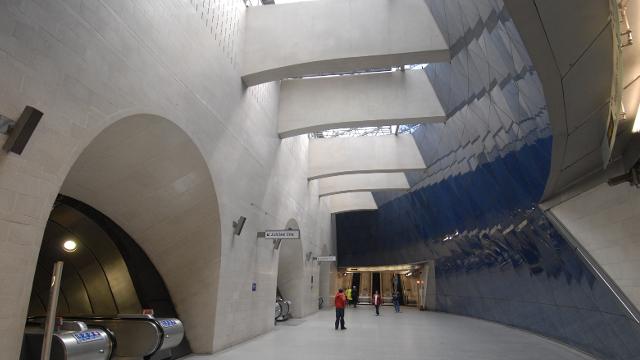 Transport for London is looking at the creation of new commercial and retail space running over and beside Southwark Tube station.

The proposals for the over-station development include the provision of around 180,000sq.ft. of commercial space and 7,500sq.ft. of retail space, creating a landmark for the area.

Southwark has just seen Vodafone open their new The Speechmark building in the area as home to 1,000 employees.

Transport for London's (TfL) plans follow on from feedback from an initial public consultation earlier this year that there is a need for a community hub and a focal point in order for Southwark to be recognised as a vibrant destination. The proposals will also incorporate affordable office space, which could be used by local or small businesses. There would also be improved pedestrian access to the existing independent businesses in the surrounding area.

Allford Hall Monaghan Morris, which has been involved in previous design work on a development above Southwark station, has been chosen as the architecture practice to deliver the proposals. The building has been designed in order to take on board comments from the local community - with a staggered structure that at its lowest is of a comparable height to the nearby Styles House in the westerly section. The development will also retain the station entrance, ticket hall and lightwells down to the Jubilee line platforms. It will also be set further back from the homes by its side with the area in between being used as a shared space for neighbouring residents and occupants of the new buildings.

The development also has a particular focus on sustainability with a diverse range of plants being incorporated across the terraces and a commitment to construct the building using cross-laminated timber, which consumes less energy than reinforced concrete.

The building will also be assessed under BREEAM to take into account its environmental, social and economic sustainability performance. The proposals also look to improve the environment around the station by providing more trees and foliage on Isabella Street.

The proposals have been enabled by an agreed land exchange with the London Borough of Southwark, which will also allow for the creation of more than twenty new council homes.

Graeme Craig, Director of Commercial Development at TfL, said: "Our plans offer the opportunity to create a new sustainable landmark for Southwark and a focal point for the community, which will help it be recognised as a vibrant and attractive destination in the capital. Reflecting the entrepreneurial spirit of the surrounding area, we are providing retail and commercial opportunities, while also delivering improvements for the local community, making the space greener and more accessible. We have taken on board the feedback from our initial consultation and invite the local community to again share their views on our designs, so that we can work together on our vision for Southwark."

Transport for London has invited feedback on proposals for building above Southwark Tube station. A consultation will last until 26 November 2019.

Picture: One of the current entrances to Southwark underground station.

The Origins of the 15 Minute City

15 minute city concepts have been demonstrated in Paris, Adelaide, London and Dublin. But is the concept as new as we might have thought?   Watch the...