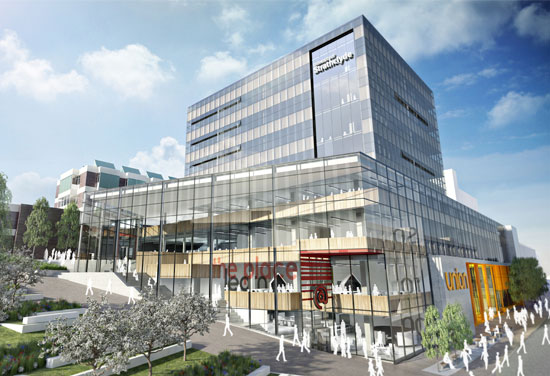 Balfour Beatty has secured a contract for the £60 million state of the art University of Strathclyde learning and teaching facility in Glasgow.

The contract, worth £33 million, has been awarded through the University’s Major Building Construction framework, to which Balfour Beatty was appointed in February 2018.

Balfour Beatty will be responsible for the refurbishment and extension to the existing Grade II listed Architecture building and the neighbouring Colville building, linking the two together to create a modern teaching space. The building will incorporate solar shading into its mostly glass and aluminium structure.

Facilities provided in the new Learning & Teaching building will include a new large-scale teaching spaces and a learning village for individual study, student-facing support services and a modern, purpose built accommodation for the University of Strathclyde Students’ Association.

Hector MacAulay, Balfour Beatty’s Regional Managing Director for Scotland and Ireland, said: “We have a long-standing relationship with the University of Strathclyde and knowledge and experience in delivering modern educational facilities across Scotland.

“With almost 23,000 students based on the central Glasgow campus, we look forward to providing an inspiring environment, while also delivering multiple social and economic benefits to the surrounding community.”

Work was due to commence on site this year, with completion expected in summer 2020. At construction peak, the project will employ a workforce of over 200, providing local employment opportunities and graduate positions.

More students from across the globe are choosing to study at UK universities, according to an international study on the world’s best education systems.

Almost 1 in 5 of all students in tertiary education in the UK are international, with the UK having one of the highest proportions of international students according to the Organisation for Economic Co-operation and Development’s annual Education at Glance report - demonstrating the quality and reputation of UK universities and their success as a global export.

The study of education systems in 36 leading countries also found that UK schools get more funding per pupil than France, Germany or Japan and the United Kingdom is now among the top three countries for education spending as a proportion of gross domestic product.

Picture: An artist's impression of how the new learning and teaching facility at the University of Strathclyde will look on completion.

The UK’s university estates have invested over £3 billion a year in new buildings and spend the same again on maintenance, energy, cleaning and security as...

The University of Greenwich has awarded Sodexo a five-year integrated facilities management deal to start in May 2020. The contract will see Sodexo bring together and...

The Concourse, the public realm regeneration project that connects buildings at Sheffield University, has seen a 'pioneering' paving upgrade that includes...