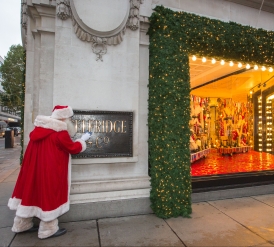 The Best Department Store in the World and the traditional London home to Santa in the lead up to Christmas has seen a group try to help themselves to luxury goods having driven a car through its hallowed doors. The famous Selfridges on Oxford Street was the scene of the attack.

Detectives from Westminster are appealing for information after the smash and grab raid happened at approximately 4:15am on Tuesday November 13.

Selfridges was voted Best Department Store in the World for an unprecedented fourth time at the Global Department Store Summit held in May and will retain the honour until 2020. Santa's Grotto has been a stalwart of the Selfridges experience. These days he is on duty every Saturday & Sunday, from 1-16 December in Birmingham and Manchester Trafford with extra dates in London.

When police officers arrived at the Oxford Street incident, they found entry had been forced by a car, which the suspects used to smash through doors.

Four suspects had arrived in two vehicles, one which they used to gain entry. There were two suspects in each car and they entered the premises stealing high value handbags before making off.

The group fled in one of the cars they had arrived in. This is described as a white VW Golf. This vehicle made off heading north and turned left into Wigmore Street. There have been no arrests and enquiries continue.

DC Tom Aylward from Westminster CID said: "This raid was targeted and lasted a matter of minutes. My team are busy collecting witness accounts and recovering vital CCTV footage of the burglary at the store and of the suspects leaving the scene."

DC Aylward continued: "Thankfully nobody was injured. I'd like to appeal for those who may have been in the area at the time and saw the individuals involved, either at the scene or fleeing, to get in touch with police and send us any mobile phone images and footage that they may have.

"All the suspects were males - at this time we are still trying to establish a full description."

In October, Selfridges revealed record financial results for the year ending 3 February 2018 - against a backdrop of severely declining fortunes for most similar outlets. Sales reached over £1.75 billion (+11.5%) and operating profit rose to a record £181 million.

Picture: Selfridges is traditionally the first store in the world to reveal its Christmas window displays.