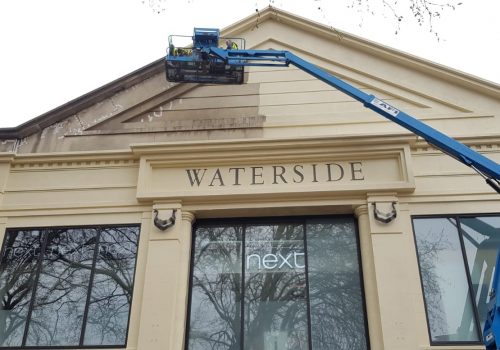 Engineers from PTSG Building Access Specialists began working on the job in the summer of 2018. They have performed a series of repair works and redecoration to the façade render of the centre using a variety of access techniques including abseiling, mobile elevating work platforms (MEWPs) and scaffolding.

Waterside Shopping Centre is situated in the centre of Lincoln, by the River Witham. Opened in 1992, it continues to thrive and be a vital part of Lincoln’s economy. Restricted access presented challenges for the team at times, however PTSG’s experienced engineers overcame these through the variety of techniques and equipment at their disposal.

PTSG has been trusted to deliver niche services for some of the UK’s most prestigious buildings. Another recent project involving PTSG Building Access Specialist’s engineers saw the team carry out vital repairs to the Balmoral Hotel. Bordered by the Waverley Shopping Mall and Edinburgh Waverley Station, as well as being on one of the city’s busiest thoroughfares, engineers successfully scaled the heights of the building to complete emergency repairs to the stonework as well as painting over 500 windows.

For this new contract, engineers from PTSG's Maidstone office will be renewing existing alarm valves and pipework for one of the Met's many sites.

Headquartered in Castleford, West Yorkshire, PTSG has 31 office locations. PTSG's brigade of fire experts are becoming a trusted and popular resource in providing all kinds of fire solutions, both within the capital and throughout the UK.