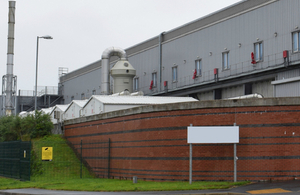 A rather smelly waste company has said 'phew' as it avoids a massive fine, for causing more than a little stink, by changing its habits and donating to environment charities.

The Environment Agency has agreed the first ever Enforcement Undertaking (EU) for odour pollution - which means the smelly culprit doesn't get fined but instead gets to make a £60,000 donation to local charities.

The EU has been agreed with Renewi UK Services, formerly Shanks Waste Management, after the company were suspected of causing odours, following a history of odour complaints.

The site on Sowerby Woods Industrial Estate, Barrow-in-Furness, is one of two in Cumbria which takes the county’s municipal waste.

Waste at the site is processed, the recyclates are removed and the remaining waste is turned into Refuse Derived Fuel (RDF). Local businesses and residents have complained of being affected by odours from the site since 2014. These reports were investigated by the Environment Agency and the Operator has subsequently put additional measures in place to minimise the impact.

According to the Environment Agency's own rules, when appropriate, it may be in the public interest to accept an EU from an Operator rather than prosecuting them for an offence. EUs allow those who are suspected of committing offences to restore the environment and to take steps to prevent a recurrence. They potentially allow a quicker resolution than a prosecution and help offenders who are prepared to take responsibility for their actions to put things right voluntarily.

Having worked with Renewi to identify changes that were needed, the Environment Agency accepted the EU offer which included an increase in the biofilter stack height, alterations to the management of the processes on site and increased sampling and monitoring.

As part of the EU, Renewi has also donated £60,000 to a local environmental charity which will benefit the local environment, made compensation payments to a number of local businesses and individuals as well as paying the Environment Agency’s investigation costs.

Claire Westgarth, Environment Agency Installations Team Leader said: "This is the first time an EU has been accepted for alleged permit breaches relating to odour at an Installation, which is a huge achievement.

"Since the Operator invested and addressed the issues on site the reduction in odour has been noted by local businesses. Whilst a site like this may never be completely free of odour, we are really pleased with the outcome for the local community.

"We are continuing to monitor odour around the site to check that the measures continue to be suitable for minimising the impact from odour."