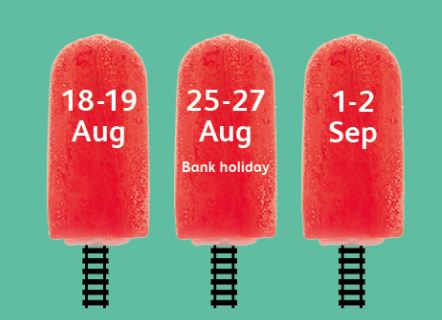 Rail fares will go up by 3.2 per cent in January 2019 - they went up by 3.6 per cent in Jan 2018. After nearly 8 months of chaos on the network, commuters could face increases that run into at lot of lolly as fares track the nation's inflation rate set by the ONS.

The Transport Ministry believes that tax payers already subsidise rail fares to the tune of £4 billion and so constant fare increases is the only way to prevent that 'unfair' contribution from rising. Commuter groups say fare rises should be calculated differently as the Office for National Statistics don't take into account rises in the cost of living such as increases in mortgage payments.

The Department for Transport is also pointing to its development plans, described as 'once in a generation investment'. Commuter groups have questioned the promised investment this year and also pointed to an endless round of strikes and changes to the national timetable in May that saw thousands of services disrupted or cancelled and connections between services failing.

Which?, the consumer rights organisation, which has plotted rail travellers' approval rating of the rail network as it has sunk to an all time low, has condemned the fare rises. Peter Vicary-Smith, Chief Executive said: “These price rises are yet more bad news for passengers, many of whom have endured a summer of chaos, including cancellations, delays, overcrowding and poor service from train companies.

“For passengers to genuinely feel they are getting value for money and a rail system that works for them, train companies must improve the reliability and safety of their services, and pay out compensation quickly and hassle-free where it is owed.”

A spokesperson for the Campaign for Better Transport said: "Given the mess surrounding the new timetable, the lack of improvements and the failure to deliver compensation. the government cannot go on telling passengers that fare increases are justified."

Euston Station Closes For The First Of Three Weekends This Summer

Euston station will be shut on 18-19 and 25-27 August and also 1-2 September. This is to allow Network Rail to replace North Wembley junction. The best advice Network Rail was able to offer customers - 'travel on other days'.

A Network Rail statement went on 'West Coast main line train passengers are being urged to avoid all but essential rail travel to and from London over three consecutive weekends in August and September when Euston station will be closed'.

All services via London North Eastern & East Midlands are now able to travel on the track in Fitzwilliam, West Yorkshire after it was struck by a tractor.

Lorries Can't Limbo is a campaign aimed at reducing the £23m annual railway bridge repair and compensation bill. The campaign will target professional HGV drivers and others who drive high-sided vehicles.

Last year the number of bridge strikes across the rail network went up, making it the worst year for bridge strikes for five years. Each year there are about 2000 railway bridge strikes, with each costing more than £10,000 for repairs and compensation to train operators for delays caused.

Research carried out by Network Rail, revealed 43% of lorry drivers admitted to not checking the height of their vehicle before heading out, with 52% admitting to not taking low bridges into account when planning their journeys.

The aim is for closer working between rail and tech firms to bring about more seamless, hassle-free journeys and better information for passengers on services and delays.

Better use of data could also allow rail companies to plan more effectively and to predict and fix issues before they arise, creating a more reliable railway.

Jo Johnson said: "This will speed the development of travel apps that provide passengers with helpful information about their journeys."