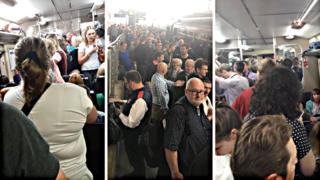 The Mayor of Greater Manchester has called on the Transport Secretary to intervene in the Northern rail fiasco while commuters on the Jubilee line can look forward to strikes on June 6 and 14.

Andy Burnham told Chris Grayling that the Government must now escalate its response to ensure that Northern’s performance improves immediately and if the service continues to get worse, the Mayor will demand the operator is stripped of its franchise.

On Monday June 4, Northern Rail were still advising customers of widespread service disruption. The operator has brought in a temporary timetable that removes 165 train services a day until 29 July.

Burnham said: “We were told that Northern were implementing an improvement plan.  We now know that services are actually getting worse.

“When I spoke to Chris Grayling I told him that passengers could not continue to endure the miserable sub-standard service they had been facing for too long.  The fact that since my call the service has continued to decline is nothing short of a scandal. Ministers seems oblivious to the scale of this chaos and the impact this is having on people’s jobs and social lives on a daily basis.

“Northern’s freefall shown no signs of slowing down, never mind improving, and if things don’t change very quickly the Transport Secretary should seriously consider showing the operator the door.”

On Monday June 4, Burnham also called for a temporary ticket price cut across the Northern Rail franchise by way of rail traveller compensation.

As even the emergency timetables collapsed into chaos, the Rail, Maritime and Transport union's General Secretary Mick Cash also called for both Northern and GTR 9Govia Thameslink Railway) be stripped of their franchises. He said: "From the feedback on the ground and the stream of comments on social media it is clear that the so-called emergency timetables on both Northern and GTR have just piled failure onto failure.

"If you draw up an emergency timetable that cancels trains to avoid cancelling trains and yet still cancel trains you are not fit to run a bath let alone a railway and that is the absurd position that passengers are in this morning (Monday June 4) across both the north and the south."

London's Jubilee tube line, which runs through Westminster and Docklands, will face two 24 hours strikes the RMT has confirmed. Driver members will walk out on June 6 and 14.‎