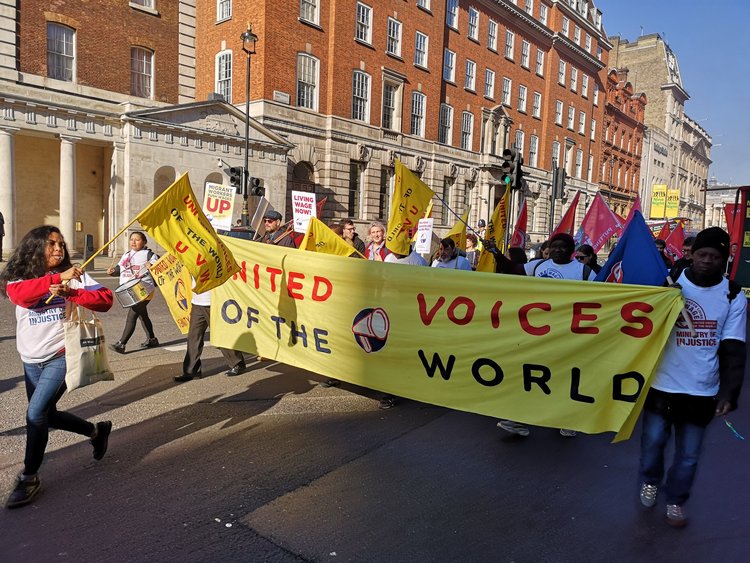 Hundreds of workers took to the streets in London to demonstrate against outsourcing, causing havoc as they marched from venue to venue to join strikers on picket lines and listen to speeches at landmark sites On Tuesday April 26.

The masses assembled at University of London and then marched on to the Royal Courts of Jusytice and then on to Parliament.

Speeches via loudhailers were given both by outsourced workers and MPs Rebecca Long Bailey, Laura Pidcock and Justin Madders - who were taking time away from Parliament with the country in another crisis.

The High Court was hearing a legal challenge against a decision by the Central Arbitration Committee to not hear an application for trade union recognition for the purposes of collective bargaining with the University of London. If successful, the application could open the door for all outsourced workers to collectively bargain with their 'de-facto' employer as well as their direct employer, introducing the concept of a 'joint-employer' to UK law.

At the first gathering point, University of London's Senate House, cleaners were on strike demanding an end to outsourcing. The march then proceeded to the Royal Courts of Justice and on to Parliament square where Justin Madders and Laura Pidcock both spoke. The march proceedd to the Department for Business Energy and Industrial Strategy (BEIS) and the Ministry of Justice (MoJ) where outsourced workers from again were on strike.

Laura Pidcock said outside Parliament: “You’re not wishing for better working conditions to be brought to you. You are demanding it and that is the way that history will be made. Every single working class person who is currently outsourced, who is on a precarious contract, who does not have enough money to live, will look back and they will thank you for your actions, for your solidarity, as unions together.”

Justin Madders told demonstrators outside Parliament: “At the moment we have an absolutely terrible combination of an indifferent government, weak employment law and greedy bosses which means that outsourcing is an opportunity to cut away at people’s livelihoods. We want to get back to a situation where you get stability in work, you get pay that represents a fair day’s wage, where you get certainty and respect in the workplace.”

Previously, Rebecca Long Bailey said outside The Royal Courts of Justice: “Today’s case could…see an improvement terms and conditions…it isn’t just a case of asking for money - workers can’t afford to live. It’s shameful that in one of the richest cities in the world our workers are being treated this way.”

University of London cleaner Margarita Cunalata said outside parliament: “We need to end this discrimination between those who count and those who don't count at all."

Susana Benavides, UVW member and former Top Shop cleaner told the crowds: “We are here to show the people in Parliament that we are human beings and we are not going to go until we get dignity and respect at work."

The first coordinated strikes by outsourced workers under three different union banners and at three separate sites are underway.

The Ministry of Justice, the Department for Business Energy and Industrial Strategy and the University of London have all been hit.

The strikes and accompanying demonstrations coincide with a landmark legal case which the IWGB says could extend greater rights to the UK's 3.3 million outsourced workers.

Hundreds of workers (many of whom are migrants) will march through London in the 'first national day of action' against outsourcing - #CleanUpOutsourcing.

IWGB cleaners will be on strike at the University of London demanding equal terms and conditions with directly employed staff. The union will also be facing the university and the government's BEIS department at the High Court.

The case put forward by the IWGB is that it should be unlawful for outsourcing companies to offer some workers worse pay, holiday entitlements, sick pay and pension contributions than those directly employed. Effectively this would make the host organisation a de facto employer jointly responsible with its outsourced supplier for the welfare of staff.

The IWGB has also waged a campaign at the University of London - Back In-house - which aims to eliminate outsourcing altogether. Cordant is the current outsourcing incumbent at the university.

Significant strikes and demonstrations in the past twelve months  have taken place at the University of London, London School of Economics (LSE), Ernst & Young and the Daily Mail. The university has made some concessions whilst the LSE has seen lecturers join a boycott of events held at the University of London's Senate House conference facility - a major revenue earner for the university.

Instead of doing their jobs in Parliament at a crucial time for the country, lefty Labourites will turn out as speakers including Shadow Chancellor John McDonnell, Rebecca Long Bailey and Justin Madders.

Long Bailey said last week: “For far too long workers in this country have suffered from worsening pay and conditions, while those at the top get richer. But seeing these mainly migrant workers from different unions come together to push back against the scourge of outsourcing gives me hope for the future of the Labour movement and the UK as a whole. These cleaners, receptionists and other outsourced workers have the courage to stand up and fight back, so we as the Labour party will be by their side every step of the way.”

The High Court has allowed the University of London and BEIS to intervene as interested parties.

IWGB General Secretary, Jason Moyer-Lee said: "For decades employers have used outsourcing as a way of evading their responsibilities towards the people who provide labour for their businesses. This is true in terms of pay, terms and conditions, as well as collective bargaining. With arguments based on the European Convention of Human Rights, this case calls for a course correction. If an employer calls the shots on workers' pay, terms and conditions, then they should have to negotiate with the workers' union."

The IWGB is being represented by solicitors from Harrison Grant and renowned barristers John Hendy QC and Sarah Fraser Butlin who appear free of charge under their commitment to the Good Law Society.

Picture: The Ministry of Justice, the Department for Business Energy and Industrial Strategy and the University of London have all been hit by outsourced workers' strikes.