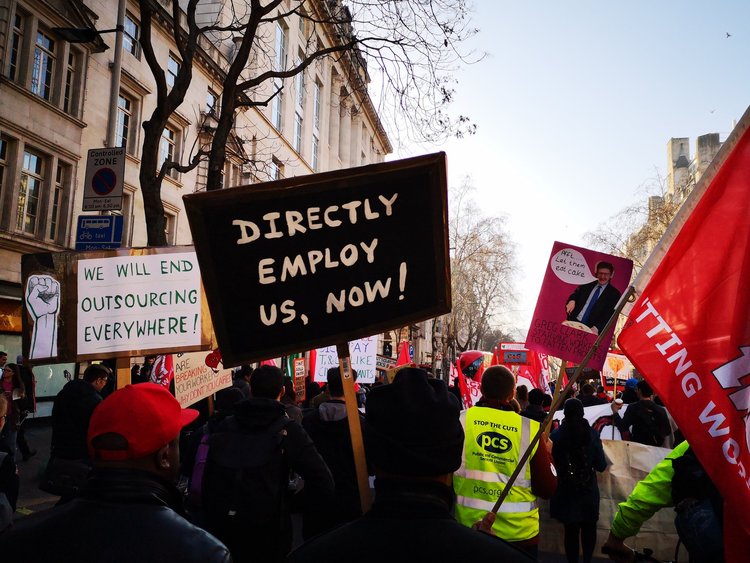 The IWGB's campaign against London universities has moved from University of London to focus on University College London. The union is balloting hundreds of cleaners, porters and security guards to vote on strike action.

Please note this is an amended version of this story which in its first iteration did not make clear the difference in actions affecting the  University of London and University College London which are two separate institutions.

The Independent Workers Union Of Great Britain (IWGB) has for more than 18-months tried to persuade the University of London (UL) to abandon outsourcing altogether and has raged a series of strikes involving workers from different contractors - the largest being Cordant.  The union even took UL to court to try to establish the concept of 'joint employer responsibility' whereby UL (and all other outsourcers) would have the same responsibility to contract employees as the firms running the contract.

The strike ballot at the University College London (the largest university in the capital) will specifically demand the outsourcing companies that manage the security contract, Axis and the cleaning contract, Sodexo, put cleaners, porters and security officers on the same terms and conditions as UCL's direct employees.

The ballot commenced on October 9. 300 workers will be involved. The results of the ballot are expected on November 5.

On September 16, the IWGB gave UCL a three week deadline (until October 7) by which to publicly commit to end outsourcing or engage in good faith negotiations with that end or face the possibility of strike action.

UCL made no such commitment. (it is not entirely surprising that UCL would not want to bring jobs 'Back In-house' given the extremely generous benefits and conditions it offers directly employed staff - see below.)

Direct UCL employees can receive up to a staggering 26 weeks of pay when they are off sick.

Outsourced workers are on the statutory minimum, which means that they get no pay on the first three days they are off sick, after which they are entitled to £94.25 a week. An IWGB spokesperson said: "This means that many workers chose to work while sick, rather than risk losing a day's pay."

Maritza Castillo Calle, the chair for the IWGB University of London branch who also used to work at University College London as a  cleaner said: “UCL would not be able to function without its cleaners, porters and security officers, however for years the university and its contractors have been happy to treat them like second class workers. They are overworked, underpaid and mistreated, while UCL is happy to look the other way when issues are raised about the abject failure of its contractors to treat people with basic dignity.

"We gave UCL a clear deadline by which to present a plan to end outsourcing which it failed to abide by. Now we are left with no option but to strike.”

Sodexo and Axis took over the cleaning/portering and security contracts, respectively in November 2018.

In March, Sodexo tried to introduce a biometric time management system, which would have required their cleaners to have their fingerprints scanned when logging in and out of work. Following a collective grievance, and protests by the IWGB and its members, the introduction of this system was called off.

In September, the IWGB launched a collective grievance on behalf of 30 cleaners and porters who complain that managers assign them an excessive amount of work.

To UCL's credit, when it was discovered that 30 Axis security officers had lost what amounted to £15,000 holiday pay between them,  they supported  the complaint and ensured the  money was paid.

Notes provided by the IWGB

Sick pay: Outsourced workers are on statutory sick pay, while direct employees are entitled to up to 26 weeks of fully paid sick pay, depending on length of service.

The University of London (Central Administration) made agreements to bring outsourced workers in-house in July 2018. 10% of those workers have been brought in-house. A boycott of using UL's dining and conference facilities is ongoing - with a number of professors and academics refusing to visit the site.

Picture: 25 & 26 April 2018 saw a huge turnout to an IWGB instigated strike at the University of London. Union members have also  acted in unison with the PCS union, Unite and the RMT for bigger disturbances.