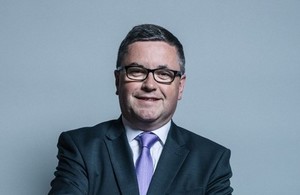 A man who killed a highways worker and paralysed another when he hit them whilst texting and driving has been jailed for a longer term than his original sentence.

Morrison, a 37 year old football agent, hit and killed Adam Gibb, 51 and left his colleague Paul Holroyd, now 53, paralysed from the chest down after losing control of his Mercedes on the M6 in Cumbria.

Morrison had been texting behind the wheel and had been driving at an average speed of 81mph, when the suggested speed limit was 50mph, in the period before the collision. His car swerved across three lanes of the carriageway and mounted the crash barrier before rebounding off a rock and hitting the victims.

The two Highways England Officers were overseeing the recovery of vehicles which had crashed earlier in the atrocious weather conditions with strong winds, heavy rain and fog patches causing poor visibility and leaving surface water on some areas of the carriageway.

Mr Gibb is survived by his wife and young son, who was 15 years old and due to sit his GCSEs at the time. Mr Holroyd suffers long-term effects because of the injuries inflicted by Mr Morrison’s actions.

Morrison pleaded guilty to causing death by careless driving but was found guilty by a jury of causing death and serious injury by dangerous driving. He was sentenced to a total of 7 years’ imprisonment at Liverpool Crown Court in January.

The Court of Appeal this week ending April 20 increased his sentence to 9 years in prison.

Speaking after the hearing, the Solicitor General, who took the decision to refer the sentence, said: “Morrison’s deliberate decision to be distracted and drive at excessive speeds in extremely hazardous weather conditions had devastating consequences for two families. “I am pleased that the Court of Appeal has agreed with me and increased the sentence today.”