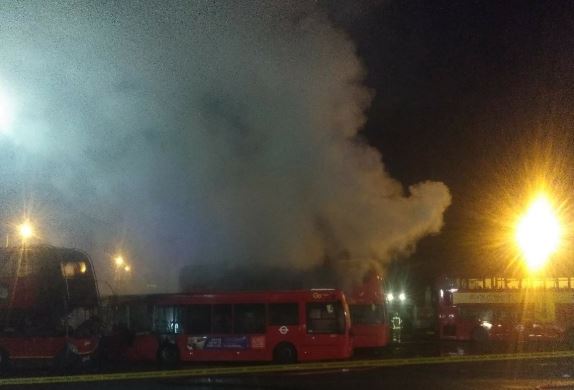 60 firefighters tackled a fire at a bus depot on Farnborough Hill in Orpington in the early hours of November 22 morning.

At the height of the blaze, eleven buses were alight and Brigade control officers took around 40 calls to the incident which was very visible. Local residents report being awakened by explosions - as diesel tanks ignited.

Crews had to work hard to stop the blaze from spreading to more buses - around 30 vehicles were moved to safety.

Seven buses were complete destroyed by the fire and a further four are badly damaged.

While the fire is now under control, crews will remain in the area for some time damping down the affected vehicles.

The Brigade were called at 3:36am and the fire was under control at 6:31am.

The cause of the fire is not known at this time.

LFB tweeted 'the #Orpington bus depot fire is now under control but crews will remain at the scene area for some time damping down'.

Picture: With thanks to London Fire Brigade (LFB).

January 2 saw firefighters remain at the scene of a massive warehouse blaze which broke out on New Year's Eve at a Shurguard self-storage depot in Croydon,...

A fire is believed to have been caused by sunlight reflecting off mirrors onto a combustible item, possibly window blinds. Six fire engines and 35 firefighters and...