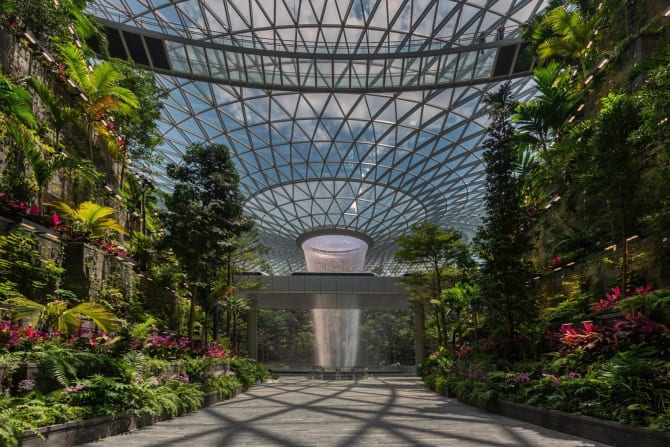 The 135,700sq.m complex has been designed by architect Moshe Safdie. It is built on the site of the former Terminal 1 open air carpark. It features a distinctive dome shaped façade. It will offer both local residents and international visitors entertainment attractions alongside shops and restaurants and accommodation facilities.

Ms Hung Jean, CEO of Jewel Changi Airport Developments, said: “The vision for Jewel Changi Airport is to be a destination where ‘The world meets Singapore, and Singapore meets the world’. The proposition of worldclass shopping and dining, seamlessly integrated with lush greenery, fulfils the needs of increasingly discerning travellers for a meaningful and experiential journey, even for brief layovers.

“Moreover, by providing innovative and fresh experiences for Singapore residents and working professionals in its vicinity, Jewel will invigorate Singapore’s eastern precincts and provide more opportunities for the public to enjoy time with family and friends.”

Visitors to Jewel can look forward to new-to-Singapore brands including Emack & Bolio’s, JW360˚, Lavender, OYSHO and Pokémon Center Singapore that will open their first stores alongside familiar homegrown favourites such as In Good Company, Supermama and Tiger Street Lab.

Multiple retailing formats are present, including duplexes, outdoor terraces and spaces within the Canopy Park on the topmost level.

The 40-metre HSBC Rain Vortex, the world’s tallest indoor waterfall, will greet visitors. Surrounding it are the manicured grounds of the Shiseido Forest Valley. Play attractions such as the Manulife Sky Nets, Hedge Maze, Mirror Maze and Discovery Slides were designed to blend into the indoor garden environment and will open on 10 June 2019.

In conjunction with the development of Jewel, Changi Airport’s Terminal 1 has also been expanded to increase capacity by another three million passenger movements per year. This brings the airport’s total capacity to 85 million, ensuring that it remains well placed to support the growth of air travel in the region.

Jewel will also house the first YOTELAIR property in Asia. With 130 smartly designed cabins that optimise space in its Premium, Accessible and Family cabins, these rooms can be booked for a minimum of four hours, ideal for short daytime layovers or overnight stays.