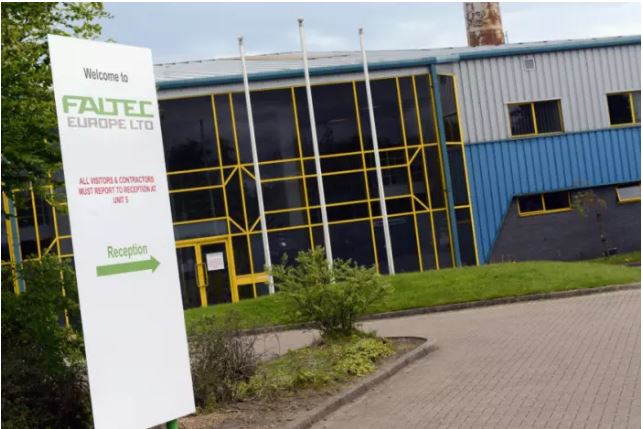 A manufacturer has been fined £1.6 million after a Legionnaires’ disease outbreak and an explosion occurred at the same plant within a year.

The Health and Safety Executive investigated and prosecuted car parts maker Faltec Europe Limited in relation to both incidents.

On May 17, Newcastle Crown Court heard that between October 2014 and June 2015, two employees, two agency workers and a local resident fell seriously ill with Legionnaires Disease. The HSE found the illness was caused by Faltec’s failure to effectively manage its water cooling systems within the factory, causing the legionella bacteria within the water supply to grow to potentially lethal levels.

In relation to the explosion incident, the same court heard that on 16 October 2015, an operator attempted to recover a part that came off production rollers at the plant in Boldon. There is an explosive atmosphere within the machine during normal production. The part he was retrieving came into contact with an electrostatic grid, which created a spark and caused a dust explosion. The 19-year old man suffered first degree burns to his face and arms.

The HSE found that adequate measures were not put in place to protect operators from explosion risks, this was despite previous explosions having occurred.

Six people and the local community

Speaking after the hearing, HSE inspector Fiona McGarry said: “The explosion and outbreak of Legionnaires’ disease at the Faltec factory had a major impact on the six people affected, with some suffering long-term ill-health as a result. In addition, the incidents raised concern amongst other employees and the local community."

HSE inspector Michael Kingston said: “Legionnaires’ disease is a relatively uncommon but potentially fatal form of pneumonia. When water systems are not properly controlled and maintained there is a risk of exposing both employees and the wider community to Legionella bacteria. Following the outbreak, and HSE enforcement, improved control measures have now been implemented by the company to better manage the Legionella risks at the site.”

McGarry continued: “Where dangerous substances create a fire and explosion risk, there needs to be adequate control measures in place to prevent an explosion or mitigate the consequences. The risks should have been assessed before the machine was put into use and the previous incidents should have resulted in a comprehensive review by a competent person. Operators need to be trained on the fire and explosion risks and understand the required controls.”

Picture: Car parts manufacturer Faltec Europe has been fined after a Legionnaires’ disease outbreak and an explosion occurred at its premises within a year.