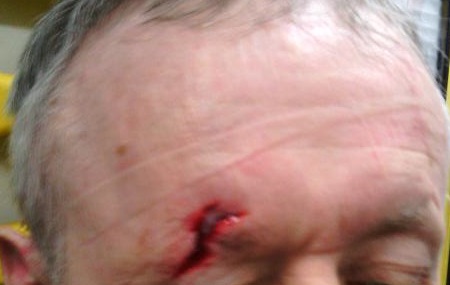 CCTV has again been put to good use by the police - in this instance the City of London police - as a violent attack was captured on Tower Bridge.

Officers have taken a number of steps since the incident on Monday, 30 April 2018, viewing CCTV, speaking to staff in the local area, sharing CCTV stills on police intelligence systems and revisiting the area where the assault happened. They are now calling on the public to help identify the man they wish to speak to in connection with the incident - and ThisWeekinFm is only too pleased to help.

The CCTV footage shows the victim walking northbound on the west side of Tower Bridge at 8:00am, while the other man walked in the opposite direction. After a brief exchange of words, the assault took place, leaving the victim, in his 50s, understandably shaken and with a gash to his forehead.

Police are appealing for witnesses after a cyclist suffered critical injuries following a collision with a lorry.

Police were called by the London Ambulance Service at around 9:50am on Wednesday, May 30  to reports of a collision between a lorry and cyclist on Seymour Street, at the junction with Portman Square, W1 in London.

Officers attended along with the emergency services and found the injured 73-year-old cyclist. He was taken by ambulence to a central London hospital where he remains in a critical condition.

The 29-year-old male lorry driver was arrested at the scene on suspicion of drug driving and dangerous driving. He was taken to a central London police station where he was interviewed and released under investigation.

Picture: The gash to the forehead of a man assaulted on Tower Bridge. CCTV is being used to find the culprit.