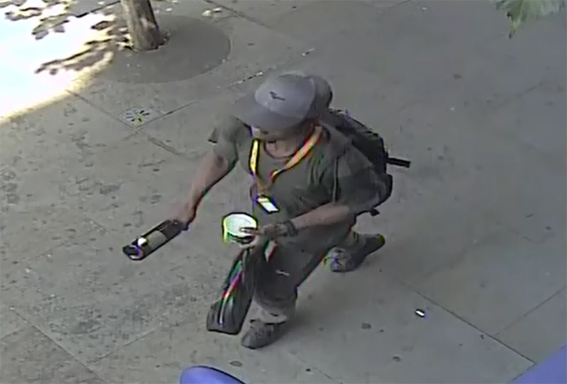 The City of London Police have issued CCTV footage requested from an un-named company's cameras in an effort to find witnesses of an incident which left a man lying unconscious in the street.

The footage was released on July 26 and show an incident of the morning of 16 May 2018. A man was pulled from a taxi on Fenchurch Place by the driver. He hit his head as he was dragged by his feet from the vehicle and was left injured in the middle of the road as the taxi drove away.

The man was found 15 minutes later by an off-duty police officer and the taxi reappeared shortly after. The driver spoke to the officer but at no point identified that the victim had been in his vehicle. The London Ambulance Service were called and the man was taken to hospital.

The taxi driver is also seen in the footage returning to the scene of the crime on foot.

PC Christopher Hook, from the City of London Police, said: “We would like to speak to anyone who witnessed this incident in May. To forcibly move a vulnerable person from your taxi and to leave them lying in the middle of the road is appalling and we need to find the man that did this."

The City of London Police also released a remarkably clear  still take from CCTV - proving the technology has improved way beyond the fuzzy images of yore.

The image was released on Tuesday July 21 and shows a man police believe is responsible for a violent assault which left a 17-year-old boy with serious head injuries.

The victim was hit over the head from behind with a wine bottle at 11.46am on Friday 27 July 2018 on Minories (EC3). He lost consciousness and fell forward into a busy main road and oncoming traffic. The teenager required surgery and is currently recovering in hospital.

The suspect in this attack is described as a 5ft 7 black male.

Detective Sergeant Mark Alston of the City of London Police said: “We would like to speak to anyone who may have witnessed this incident or may be able to help us identify the man in the image.

“This appears to be an unprovoked attack and we believe his clothing, and in particular the lanyard he is wearing, is very distinctive. We are grateful to the company concerned for the supply of the CCTV from which the image is taken."

Picture: Main - the man thought to have hit a teenager over the head with a bottle. Below - the CCTV footage of a taxi driver assaulting his passenger.