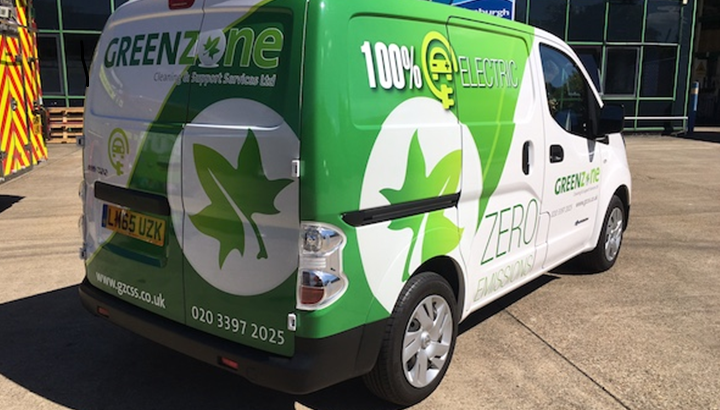 Commercial cleaning company GreenZone Cleaning & Support Services, has invested in four EV charging pods outside their head office in West London - which will help them beat the Ultra-Low Emission Zone which comes in to force in 2019.

The firm has a major step in reducing its environmental impact by committing to replace its entire diesel fleet of cars and vans with fully electric vehicles (EVs).

The company has said it plans to replace the rest of its vehicles in the fleet that are non-compliant with the emissions standards with EVs by April 8th 2019, the date of the introduction of the Mayor of London’s Ultra-Low Emission Zone (ULEZ).

The ULEZ is being introduced to help improve air quality in London. It means most vehicles, including cars and vans, will need to meet new, tighter exhaust emission standards or pay a daily charge to travel within the area of the ULEZ.

The investment means GreenZone will be saving itself £22.50 per vehicle per day in ULEZ and congestion charge costs come next April, as well as in parking costs.

Significantly, Planet Mark member, GreenZone will see its carbon footprint reduce dramatically over its next two annual reporting periods. Fleet emissions made up nearly 90% of GreenZone’s carbon footprint in its last reporting period (year ending December 2017), and emissions from the company's fleet saw an increase of 7% due to business growth and an increase in staff numbers.

“This investment is going to be huge for us,” said GreenZone’s Operations Director Guy Travers, who has been leading the company’s drive to switch to EVs. “Not only is it going to save us money but it’s going to make a huge improvement in our environmental impact. It’s absolutely the right thing to do and our EVs are going to be a great way for us to send out a clear message to our customers and beyond that we are committed to sustainability.”

Flavia Tavares, Sustainability Consultant for The Planet Mark, said: “The carbon emissions of driving 10,000 miles on an average EV’s emissions result in 68% and 66% lower emissions than petrol and diesel vehicles, respectively. Considering that GreenZone’s carbon footprint is largely attributed to fleet-related emissions, a move from fuel-powered vehicles to EVs will not only decrease the business impact on the environment but also result in a much lower carbon footprint.”

As well as GreenZone’s company branding and '100% electric' and 'zero emissions' messaging emblazoned across the sides, the EVs will also, for the first time, carry The Planet Mark logo.

“This is the biggest visible action we’ve taken to date in terms of promoting our green credentials,” said GreenZone’s Project Manager Linda Bell, who said she was grateful to the Mayor of London for having implemented the new policy. “Sadiq Khan has given us a clear timeline well in advance so we can prepare for this switch and we would encourage other companies in London to do the same.”