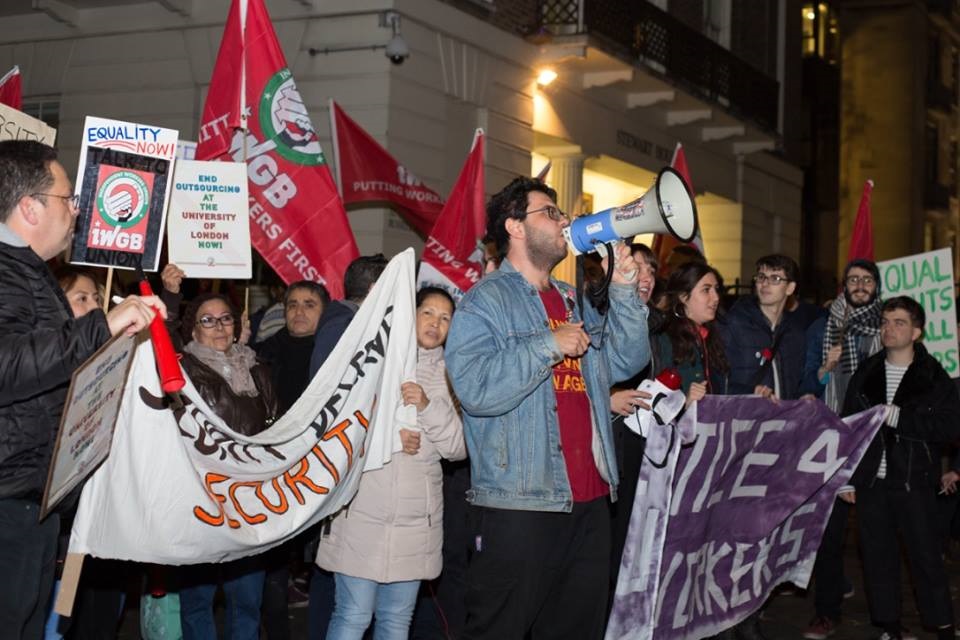 Academics, students and politicians are to boycott the University of London over its outsourcing policies. If the boycott gains further traction, it could put a substantial dent in the Uni's venue hire income of £43 million a year.

The rabble-rousing IWGB union has not only orchestrated a series of strikes and protests in its 'bring it back in-house' campaign, it has also pointed the finger of racism and sexual assault at contractors - blackening their name and that of the university, whilst also making it harder to image conscious customers to take their events to what was once a prestigious space.

The one hundred club

Over one hundred academics, politicians and others have agreed to back the boycott. The supporters include several professors along with John McDonnell MP and the National Union of Students. They, like the Independent Workers Union of Great Britain want the university to end outsourcing and directly employ its outsourced workers that provide cleaning, catering, security and other services - mostly through Cordant.

The boycott asks supporters to not attend or organise events at the University of London central administration, which includes Senate House includes Stewart House, The School of Advanced Studies, the Institute of Advanced Legal Studies and Student Central. According to its latest financial report, the University of London made £43 million from residences, catering and conferences in the year ending July 2018.

Outsourced workers at the University of London have been campaigning to be made direct employees with equal terms and conditions as other staff for over a year. These workers - who say they have worse sick pay, holiday pay, maternity pay and pension contributions than directly employed staff - have taken up to 15 days of strike action.

The IWGB claims the university has spent hundreds of thousands of pounds on heightened security in an attempt to stave off industrial action and protests.

The university has made some moves to bring services in-house but the bulk of outsourced workers – maintenance, cleaners and catering - will remain outsourced at least until their contracts are up for tender in 2019, 2020 and 2021. At that point an in-house bid will be presented alongside other commercial bids.

This year alone the IWGB has managed to produce 50 complaints on behalf of outsourced workers at the University of London. Notably the IWGB raised a complaint in July when it accused a senior manager at Cordant of being a right-wing sympathiser.

In October, the union raised an issue with the university after three women brought complaints of sexism and homophobia against a different Cordant manager.

London School of Economics Anthropology Professor Dr David Graeber said: “It is completely reprehensible that people that provide such an essential service continue to be treated as second class workers by the University of London. As academics who benefit from the work of the cleaners, catering staff and other outsourced workers, we have a moral duty to stand in solidarity with them and boycott the university until it ensures that they are given the same terms and conditions as other staff.”

Kings College London Lecturer Nick Srnick said: "At a time when university Vice Chancellor pay is surging across the country, it is an outrage that the least well-off workers of the university continue to face a situation of hyper-exploitation and abuse. Yet there's an easy solution to immediately improve the lives of the workers that keep the university running: join numerous other universities in bringing them back in-house and paying them a decent wage."

Picture: Solidarity - Lecturers will stand shoulder to shoulder with maintenance workers, cleaners and catering staff in a boycott of University of London to encourage the taking back in-house of contract staff.