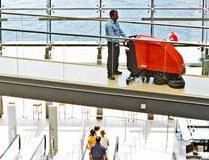 ISS has replaced Carillion on two contracts let by Modern Courts. They will be providing a range of soft and hard facility services for the Ministry of Justice in five locations across Humberside and East Anglia. Meanwhile, Cordant Services has retained its job at Tunbridge Wells Borough Council.

The contracts were initially awarded under the Government’s Private Finance Initiative (PFI) with services originally delivered by Carillion Services.

ISS has been working closely with Modern Courts, to ensure continuity of services, since the Court appointed Official Receivers PwC to manage the liquidation of the Carillion businesses.

The contracts will see ISS provide services, including security, helpdesk, cleaning and mechanical and engineering services across the Magistrate’s Courts at Hull, Beverley and Bridlington and the Crown Courts at Ipswich and Cambridge.

Tunbridge Wells Borough Council has renewed its contract with Cordant Cleaning for a further 3 years and extended the remit to include additional services. It builds on a successful partnership which started in 2014.

Under the terms of the new contract, Cordant will continue to carry out daily and periodic cleaning services across 24 council properties. These include the Town Hall, Theatre, Museum, Crematorium, Sport Pavilions  and Public Toilets. The extended remit will involve managing the provision and supply of washroom products, window cleaning across the cleaning estate along with a number of deep cleaning services.

The contract will be delivered using a combination of static and mobile cleaning teams supported by a dedicated Contract Manager.

Denise Haylett, Head of Business Support at Tunbridge Wells Borough Council said: “Cordant Cleaning have worked closely with TWBC over the past four years, enabling a transition in working practices that has ultimately led to our decision to renew their contract.  Realistic KPIs and SLAs are in place and with the CAR Audit Tool I am positive that the contract will keep on track and meet the targets set.”

Guy Pakenham, MD of Cordant Cleaning, said: “This is a high profile and complex contract covering different types of buildings and locations, all with specific cleaning requirements.”

Picture: ISS has replaced Carillion for cleaning services amongst others on two contracts let by Modern Courts.

Public sector contracts should be awarded to companies that agree to share profits with staff and employ local workers, a leading businessman has said. Phillip Ullmann...