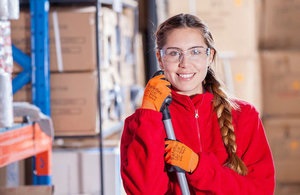 On 8th January, even before the Carillion fiasco unravelled, thousands of small and medium-sized enterprises (SMEs) were made able to bid for up to £12 billion of government contracts more easily, thanks in part to the work of government lawyers.

Chris Stanley, a lawyer within the Government Legal Department’s (GLD) Commercial Law Group has spent the past year condensing some 50,000 words of the existing Crown Commercial Service (CCS) contract terms into a new slimline Public Sector Contract. The finished document promises a more user-friendly route to government work and a quicker, more streamlined way of working.

Not having to wade through dense contracts will save money and resources not only for SMEs but also within government itself.

The new Public Sector Contract is a collaborative effort by the Government Digital Service (GDS), focusing on user research, content design and interaction design, the Crown Commercial Service (CCS) and the legal review of both GLD and the law firm DLA Piper. This multidisciplinary team is working to bring policy and digital together to deliver contracts.

Chris Stanley paired with Tracy Hughes, a content designer from the Digital Marketplace team at GDS. The two went through the entire draft document line by line, cutting and trimming the more opaque legalese and getting rid of any duplication, so that the meaning was clearer and more comprehensible for non-lawyer users.

It was not by any means an easy trade as Hughes’s focus was on plain English, which Stanley admits went against his natural legal inclination to wordiness. But they eventually achieved a compromise: “It was definitely the best way to ensure that the content is more accessible to everyone while remaining legally sound,” Stanley said.

But how do you go about cutting down a government contract so substantially?

According to Stanley, the chief difference is: “The existing content is presented in a clearer and more concise way, while frequently unnecessary provisions have been moved into modular optional Schedules.”

One of the major benefits is that a small organisation or company that does not have a dedicated legal team will now be better able to understand and adapt the Public Sector Contract to its needs by merely selecting those elements it needs to apply.

The benefits also apply for public sector buyers. Stanley explains: “There are some smaller organisations that may not have extensive procurement experience. They are run by skilled people but they won’t always have the resources to deal with complex contracts. Without a user-friendly government framework they are likely to pay a far higher price for goods and services using less favourable terms.”

Public sector buyers which have greater legal capabilities, such as the Ministry of Justice, will still be able to adapt the contract to suit their more specialised requirements.

The prize is right

The prize is considerable - the government facilities management marketplace alone is worth around £12 billion and covers everything from mechanical and electrical engineering to cleaning.

The new contract will not only make it easier for companies to bid for government work but will also establish a benchmark for good business ethics by integrating some new corporate social responsibility obligations. “We want our suppliers to be good corporate citizens,” Stanley says.