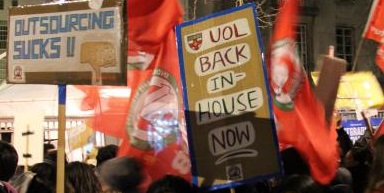 Outsourced university workers have announced yet another round of industrial action.

Organised by the Independent Workers Union of Great Britain (IWGB), over 100 cleaners, porters, security officers, receptionists, gardeners, postroom and audiovisual staff are to go on strike on June 6.

The workers, who are employed by a number of outsourcing companies that have contracts with the University of London central administration, are demanding to be made direct employees of the university and for equal terms and conditions with those that are directly employed.

Pidcock MP said at the time: “The IWGB campaign is incredible and the picket was certainly the liveliest I’ve been on. I’m convinced they’re on the right side of history and that they’ll win.”

IWGB President Henry Chango-Lopez said: “Last month we saw the biggest strike of outsourced workers in UK higher education. The message the workers sent the university is clear – they want to be made direct employees with the same terms and conditions as other directly employed staff. As long as the university continues to ignore this call, industrial action will only escalate.”

The strikes are part of the IWGB’s 'Back In-House' campaign, which is calling on the university to end outsourcing, to abolish zero-hours contracts and that it implement pay rises promised six years ago but not delivered.

A mass protest involving the same rent-a-crowd and students that have previously attened in support of the strike will also be held on  June 6 from 5:30pm.

Picture: University of London workers have announced yet another round of industrial action for June 6. Picture is from a previous strike.