With the furlough scheme coming to an end and a general call to return to work, there are still many people who are genuinely frightened to do so; such was the effectiveness of Government messaging at the very beginning of lockdown (plus a rising death toll)!

These are extraordinary times and the situation is still very fluid, but we are going to have to get used to living with the COVID-19 virus until a vaccine eventually becomes available and a full return to work in the meantime is inevitable, notwithstanding localized lockdown measures. This article sets out to explore some of the issues.

Back to Work Concerns

Working from home, once considered a privilege and even a euphemism for ‘skiving off’, has now become the norm for many office-based workers, with the support of modern technology.  Some will like the new arrangements because of the flexibility and improved work-life balance, but equally, there are those who do not have dedicated space at home or miss the social interaction with colleagues regardless of the health risks.  New research from the CIPD¹ shows employers expect that the proportion of people working from home on a regular basis, once the crisis is over, will increase to 37% compared to 18% before the pandemic.  However, there is an overwhelming majority of blue-collar jobs that simply cannot be done from home and workers need to be at the metaphorical coalface in sectors ranging from manufacturing and warehousing & logistics to retail and hospitality.  But organisations like the British Safety Council (BSC) recognise that individuals may be “in a different place” depending on their personal health and family circumstances and should not be rushed back to work, according to a recent podcast².  The BSC generally believes that no one should be injured or made ill through their work which is consistent with many company statements of corporate social responsibility.  Indeed, there is a legal duty of care under the Health & Safety at Work Act, 1974.

In keeping with any risk scenario, having undertaken an assessment, and applied best practice it is normal to have strategies for avoidance and mitigation but also to address ‘it has happened’!

The method of infection is well understood i.e. airborne transmission of the virus in exhaled, moist breath, and/or hand-to-face contamination.  Stay at home, was the original avoidance strategy whereas regular hand washing or sanitising, the wearing of masks and social distancing singly or in combination act as mitigation.  In the case that a test confirms an infection, contact tracing can also be used to isolate others who may have unwittingly become infected.  Without social distancing (and other pandemic containment measures) pathogens can spread exponentially and quickly get out of control as we have experienced in the so-called second wave following the relaxation of restrictions and some complacency set in.  Social distancing is, therefore, a key tool in a back to work strategy. 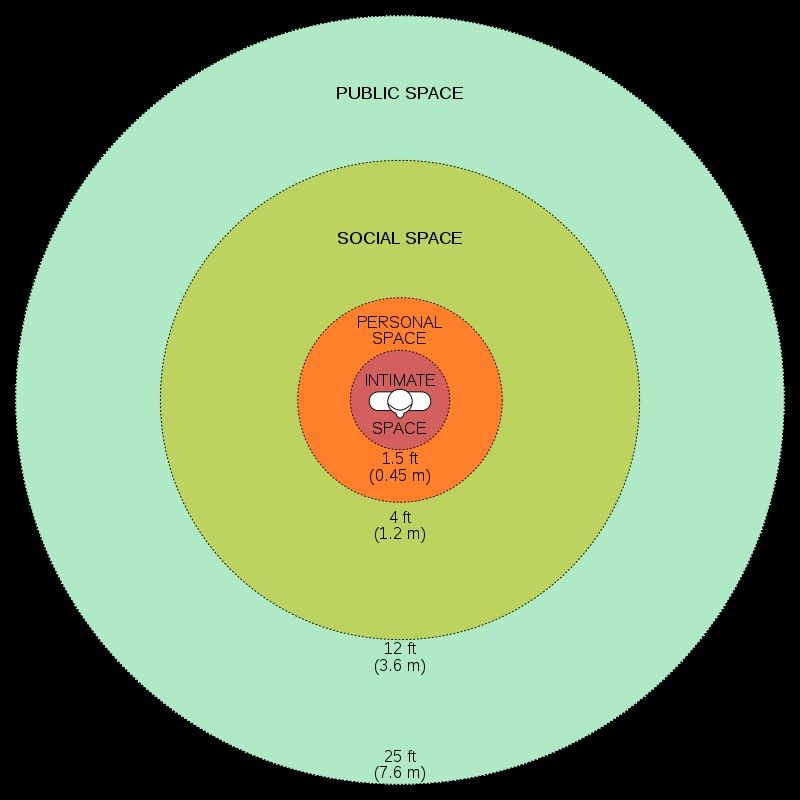 The figure is an interpretation of Edward T. Hall’s work in the 1960s on proxemics; a study of human space and the effects that population density has on behaviour, communication, and social interaction.  We are probably familiar with the idea of intimate and personal space, but the term social distancing is a very new concept.

Social distancing measures actually date back to at least the 5th century BC, the Bible³ containing one of the earliest references to Leper colonies which were established as a means of preventing the spread of leprosy and other contagious diseases (through social distancing), until the transmission was understood and effective treatments invented, not unlike the research for a Coronavirus vaccine.

A 2-meter ‘safe’ distance is based on the characteristics of airborne transmission, whereby the water droplets carrying the virus naturally fall away due to gravity.  An unexpected outcome of keeping a 2-meter distance may be difficulty in communicating face-to-face in a noisy factory environment, which may point to a ‘noise problem’ that itself requires further investigation.

We are social animals and like to mix with our fellow human beings.  In normal times, friends and colleagues will regularly break the social space.  Changing our instinctive behaviour requires constant, consistent messaging and regular supervision, to nudge people to change their natural behaviour.  Rather like Pavlov’s dogs we (hopefully) become conditioned to respond in a particular way i.e. maintain a safe distance without thinking but it is rather easy to ‘forget ourselves’.  There is detailed guidance available on creating a COVID-secure facility but despite this, some sectors have experienced problems.  Take the food processing sector.  It represented circa 15% of the pre-pandemic GDP and 15% of the manufacturing sector workforce.  It is in fact the largest subsector by headcount, who are classed as essential workers and have continued operations throughout the pandemic.  The Food Standards Agency (FSA) said in August 2020 that there were around 40 food factories with active outbreaks in England, Wales, and NI and a September report⁴ by Pensions and Investor Research Consultants (PIRC) stated that there had been at least 1461 cases and 6 fatalities but believe the actual figures to be much higher.  The outbreaks have variously been blamed on difficulty in maintaining social distance (standing within 1 meter is allowed in this case) but also transmission outside the workplace because many co-workers live in multiple occupancy homes and tend to car share or use (overcrowded) public transport.  A major outbreak has the potential to halt production which could cause food shortages in the UK’s just in time supply model.  Maintaining the supply chain across all sectors is vital to helping the economy recover but worker’s safety must remain of paramount importance.

In conclusion, rather like home working and because you cannot manage what you do not measure, perhaps there is a role for technology to support social distancing, as well as providing track and trace and other insights?  In future articles, we will look at the use cases for smart technologies, review the technologies available as well as their cost-benefit.

1.   Homeworking set to more than double compared to pre-pandemic levels once the crisis is over.  CIPD press release, 16th June 2020

Casella is dedicated to reducing occupational and environmental health risks through effective monitoring solutions. Casella prides itself on providing precision instrumentation since 1799, supplying eminent figures including David Livingstone and Charles Darwin with instrumentation for exploration and scientific work.

For over 200 years, our innovative solutions have helped improve health in the workplace & community. 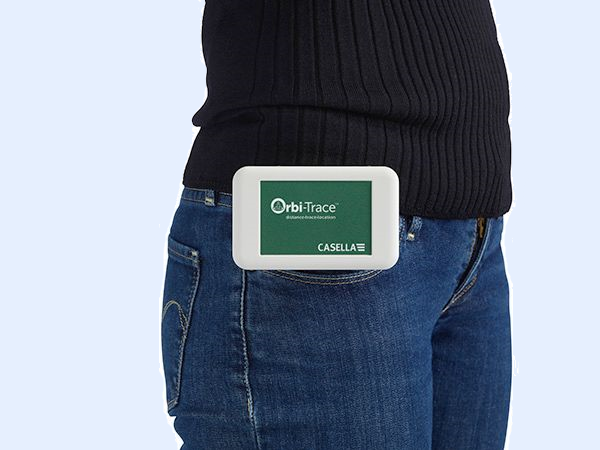 Orbi-Trace is not just a social distancing tag. When used with a single anchor at an entry point of a building, tags transmit contact data with our intelligent online software. These innovative tools help to enforce social distancing and provide a detailed risk assessment of your working area.

A set of 3 anchors will enable real-time location system (RTLS) on the tags. 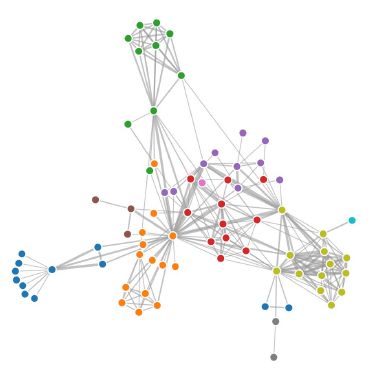 Use the Infection Insights Software to obtain a spread index of staff, review risk levels and log test results. Be safe without having to stop business.

Casella is a division of

IDEAL INDUSTRIES, INC. is a global enterprise with companies serving technicians and workers across a wide range of industries, from electrical to construction to aerospace to automotive.