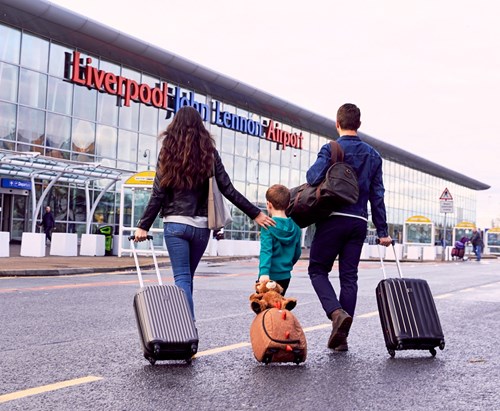 John Lennon airport is bracing itself for holiday travel chaos after the GMB union launched a strike ballot of around 200 members working on the Swissport Easy Jet contract and Swissport Mainline.

Both ballots finish on August 7 2019 and if successful, industrial action will take place on August Bank Holiday weekend.

Health & Safety is top of the workers' complaints according to GMB organiser, Eddie Parker, who said: “Our members working at Liverpool’s John Lennon are unhappy with Health & Safety issues, working practices, pay and the company’s breach of the recognition agreement. Despite numerous attempts at constructive discussions, our relationship with the company is fundamentally broken, yet is not too late for the company to get round the table and thrash out a deal.”

A strike by more than 4,000 workers at Heathrow planned for both Monday 5 and Tuesday August 6 has been suspended while the workforce votes on an improved pay offer.

Unite, the union behind the cancelled strike action, said it would not be revealing the details of the improved offer until members involved in the pay dispute have had an opportunity to consider and vote on the new package.

However, Unite said that the strikes already announced for Friday 23 and Saturday August 24 remained on the table until the result of the ballot is known.

Acas had intervened on Monday August 5.

Heathrow Airport was faced with paying millions of pounds in compensation to airlines for cancelled flights. Airlines receive £26 per passenger compensation for every cancelled departure.

Friday August 2 had seen a ballot of security guards, firefighters, engineers, passenger service operatives and passenger service drivers in favour of strike action, with members rejecting a pay offer. Acas was immediately brought in to attempt to find an improved offer that could be put to the workers and thus stave off the strike action for the following Monday and Tuesday.

Unite regional coordinating officer Wayne King said: "Heathrow Airport’s chief executive officer John Holland-Kaye was paid £4.2 million in 2018 - in two days he earns what some of the lowest paid Heathrow security guards earn in a year. To add insult to injury, they are also having to contend with widening pay disparities leading to airport security guards employed after 2014 earning up to £6,000 less than colleagues hired before that date."

Newham council and Unite have reached an agreement in a dispute over pay and terms and conditions which means proposed strike action has been called off.

The two sides reached agreement after talks at Acas.

Strike dates were originally set to run from Monday June 24 to Friday July 5 but were suspended pending the Acas negotiations. No new dates were set and as a result of the Acas agreement, all strike action has been cancelled.

The agreement will see lorry loaders receive a one off payment to settle a pay dispute and the council has committed to review terms and conditions of employment for the service.

It Asda be save money, live better

Asda workers from across the country will gather at City Square, in Leeds City Centre, at 12 noon on August 14. Speakers will address the crowd, before a march past Asda house, finishing at the Tetley Brewery at 2:00pm.

Gary Carter, GMB National Officer told ThisWeekinFM: "Asda wants to impose the so-called 'flexible' Contract 6 that will see workers no longer paid for any breaks and forced to work bank holidays in return for £9.00 per hour pay rates. The contract had previously been voluntary for staff – but many now say they are being strong-armed into signing a new deal.

"In a recent consultative ballot, 93% of respondents told the GMB that they did not agree with the contract changes which were being forced on them."

Carter continued: “This demonstration will send a message to Asda that however much pressure management has put on staff to sign, workers believe Contract 6 is still not good enough. It cuts holiday entitlement, slashes bank holiday and night shift pay and introduces an any time, any place, anywhere culture which risks a hugely damaging impact on the predominately part-time, low paid, female workforce, who need flexibility that works for them."