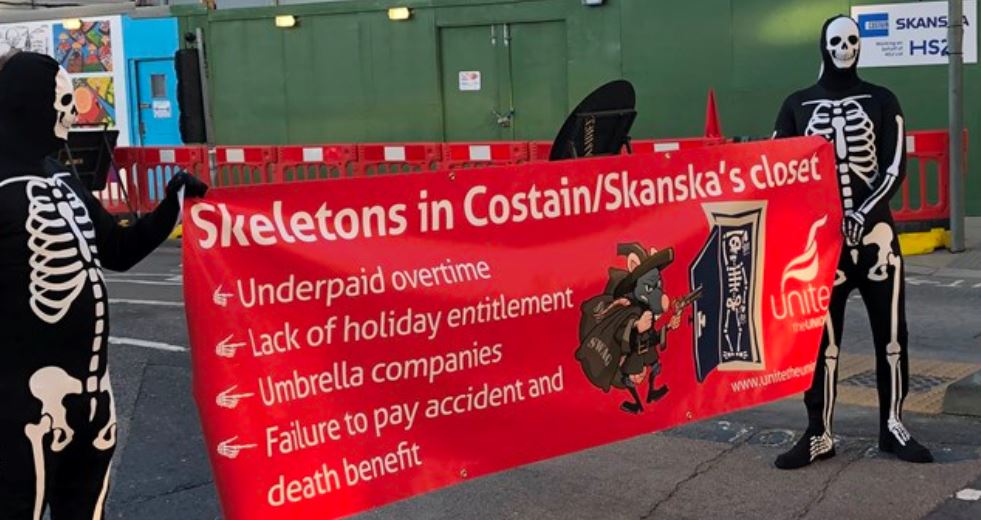 Workers on the Euston HS2 site are being stopped from easily meeting their union reps because 'they are too traumatised by the discovery of skeletons at the site'.

The Costain/Skanska Joint Venture (CSJV) has claimed that the reason Unite has been barred from the site is because workers are too disturbed after removing centuries old human remains from the St James Gardens area and need to ‘decompress’ rather than speak to a Unite official about workplace issues.

Rather than allow Unite free access to speak to workers in the canteen, CSJV has instead offered to provide a separate room where workers can arrange to meet with a union official.

Unite national officer Jerry Swain said: "This offer is a clear breach of the industrial agreement and the HS2 framework agreement. Skanska and Costain both guilty of blacklisting construction workers, Unite has rejected the proposal."

Unite has been holding regular protests outside the site over wage issues - including on Friday April 26. Swain continued: “Every time Unite speaks to workers on this troubled site it finds more skeletons bursting out of the closet. Basic employment rights are being routinely flouted and CSJV has been supine in its indifference to the exploitation being faced.

“Unite was given an undertaking by Skanska/Costain’s project director that the correct overtime premiums would be applied and such payments would be backdated. It now appears that this was not the truth and it is difficult to see how the joint venture can retain any credibility on this project."

Swain added: “It is disturbing to think what other vital components of the project are also being treated with the same degree of contempt.

“If workers are genuinely traumatised by their experiences then it is absolutely imperative that they receive help and assistance from Unite, in order to prevent further problems developing.

“The morale of the workforce is being seriously affected by the mistreatment on the site, which is likely to be severely affecting productivity.”

The biggest sore for workers is the issue of underpaid overtime which is costing workers up to and over a £100 a week. Unite previously discovered that labour supply company Bowercross Construction Ltd was not paying the correct overtime rates. However after paying the correct rates to around 200 affected workers for a fortnight, Bowercross has since reverted to underpaying overtime rates, stating (according to the union) it had discovered a loophole which allowed it to do so.