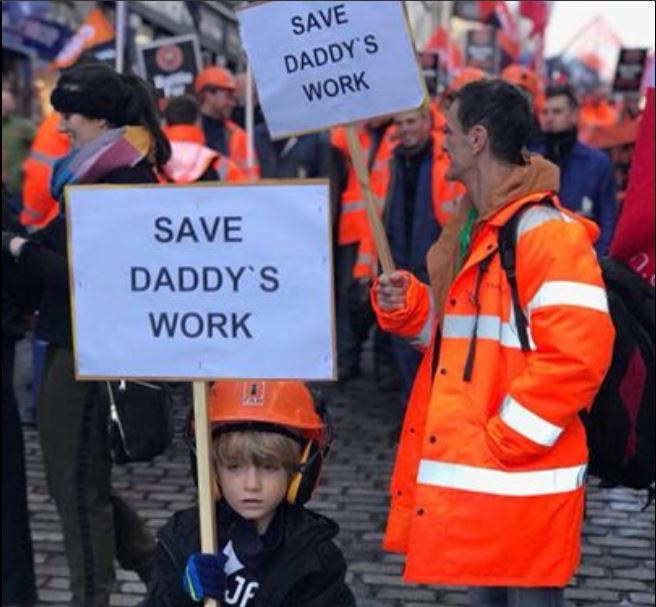 An offshore wind energy 'revolution' is to provide a third of all UK electricity by 2030 but the contracts to fabricate turbines are likely to go overseas.

By the target date there will be more electricity from renewables than fossil fuels, with 70% of British electricity predicted to be from low carbon sources by 2030. This will require and over £40 billion of infrastructure investment in the UK. It could see the number of jobs in the sector triple to 27,000.

BiFab trade unions GMB and Unite have warned that the prospect of no work coming to Fife from two major Scottish offshore renewables projects would be ‘an absolute scandal’.

The Moray East and Kincardine offshore wind farm projects have a total value of around £2.8 billion and BiFab’s new Canadian owners DF Barnes have been actively pursuing contracts from both.

However, the fabrication work for five platforms supporting the Kincardine project have been awarded by procurement firm Cobra Wind International to the Spanish state shipbuilders Nevantia.

'The immediate challenge for everyone is to try and break this international stranglehold on the Scottish renewables sector', said a joint union statement.

DF Barnes remain in negotiations to secure a portion of the fabrications work from the contracts allocated to both Smulders and Nevantia.

GMB Scotland Secretary Gary Smith said: "There is a real possibility the yards in Fife could end up with nothing from the Moray East and Kincardine projects, which would be an absolute scandal. We believe DF Barnes and the Scottish Government are fighting hard to secure contracts but they are trying to negotiate their way through a spaghetti bowl of vested interest groups with established supply chains of preference.

"The truth is that state funded European energy and engineering firms, backed by Far East finance and Middle East sovereign wealth funds, are carving-up thousands of jobs and billions of pounds from our renewables sector."

Unite Scotland Secretary Pat Rafferty said: “To working class communities in Burntisland and Methil this doesn’t look anything like a just transition or a green jobs revolution - it looks like a future that’s heavily rigged against their hopes for employment and prosperity."

Offshore Wind Sector Deal is anticipated by government to:

Energy & Clean Growth Minister Perry, said: "This new Sector Deal will drive a surge in the clean, green offshore wind revolution that is powering homes and businesses across the UK, bringing investment into coastal communities and ensuring we maintain our position as global leaders in this growing sector."

The Co-Chair of the Offshore Wind Industry Council and Ørsted UK Country Manager for Offshore, Benj Sykes, said: "Now that we’ve sealed this transformative deal with our partners in government, as a key part of the UK’s Industrial Strategy, offshore wind is set to take its place at the heart of our low-carbon, affordable and reliable electricity system of the future.

"This relentlessly innovative sector is revitalising parts of the country which have never seen opportunities like this for years, especially coastal communities from Wick in the northern Scotland to the Isle of Wight and from Barrow-in-Furness to the Humber. Companies are burgeoning in clusters, creating new centres of excellence in this clean growth boom. The Sector Deal will ensure that even more of these companies win work not only on here, but around the world in a global offshore wind market set to be worth £30 billion a year by 2030."

In addition, the deal will challenge the sector to more than double the number of women entering the industry to at least 33% by 2030, with the ambition of reaching 40% - up from 16% today.