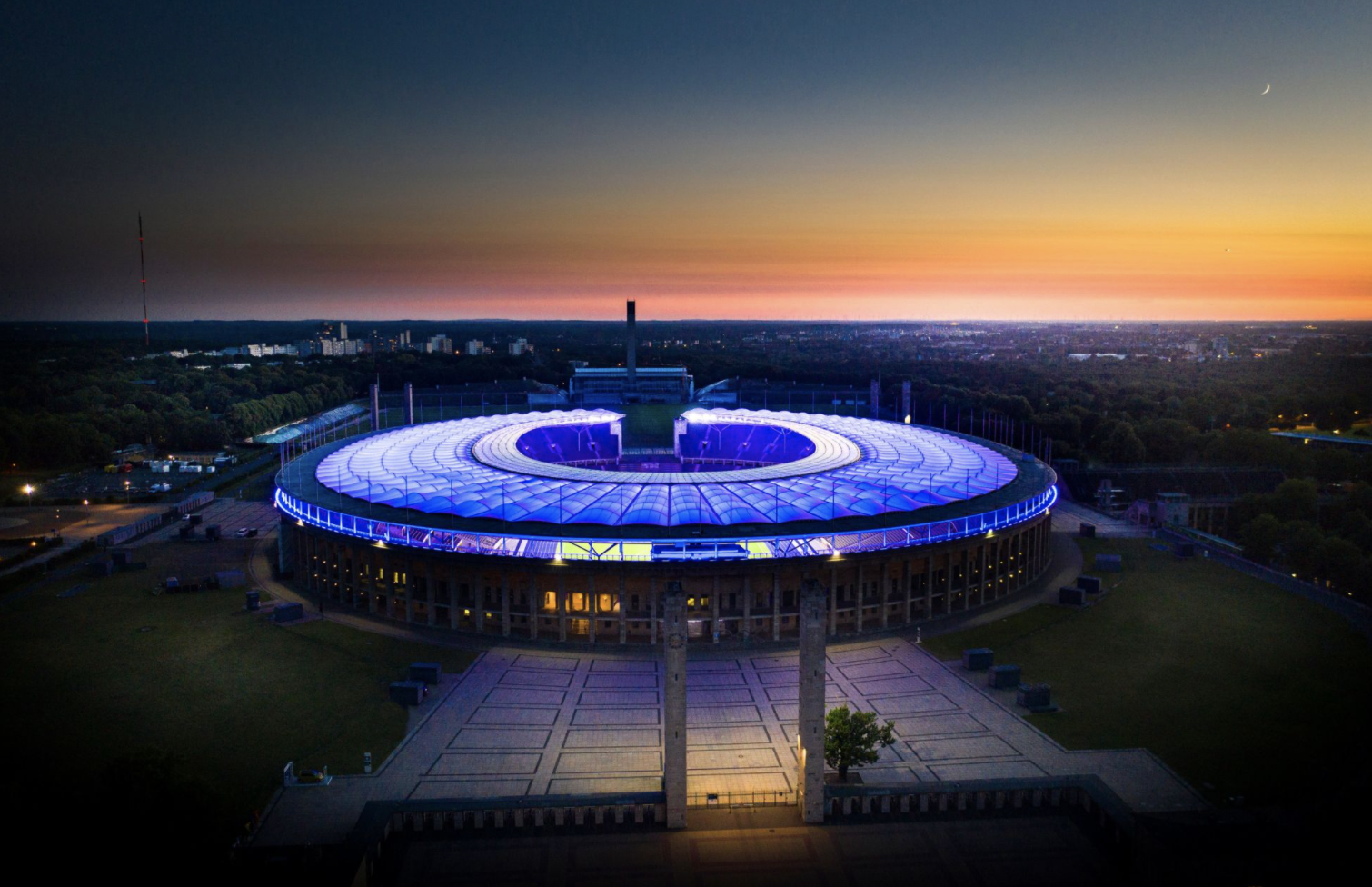 The Olympic Stadium Berlin is to generate its own solar electricity in a major investment to drive both climate security and the urban energy transition to clean, green power.

A 605.25 kilowatt-peak PV (photovoltaic) system comprising 1,614 photovoltaic modules will be installed on the outer concrete ring of the stadium roof. This will produce almost 615,000 kilowatt hours of electricity a year – enough for around 205 three-person households.

The electricity will power the stadium's ventilation, cooling and lighting systems and other services. Due to the Olympic Stadium’s high consumption, almost all the electricity generated will be used on site, currently accounting for some 11 percent of local demand. The PV system will be the cornerstone in a bigger drive for a climate-neutral stadium, saving 225 tons of CO2 per year. The level of self-sufficiency achieved in the form of independence from the public power supply will be increased even further in the medium term through the use of electricity storage using second-life batteries.

The PV system will be operated by the eco-energy supplier Polarstern, which is investing around 625,000 euros in the project and is responsible for the stadium’s solar electricity supply through a power purchase agreement (PPA).

The project was initiated six years ago by the stadium’s tenant, Olympiastadion Berlin GmbH, and in its current form by Ludger Bottermann, CEO of KOCO Energy AG, whose connection to the stadium goes back a long way. Among numerous international construction projects, Mr Bottermann’s fellow board member Klaus-Michael Koch was responsible, before entering the solar industry, for the production and installation of the venue’s translucent membrane roof, used in the 2006 football World Cup.

"The local supply of solar power for large event and sports facilities makes an important contribution to our social and environmental future, both because of the prospective CO2 savings and symbolically," said Florian Henle, Managing Director of the green power provider Polarstern. "Visionary projects like this one underline the importance of decentralized energy and will hasten its wider adoption."

The Dresden-based system provider Solarwatt is supplying the solar modules for the photovoltaic scheme. Detlef Neuhaus, Managing Director of Solarwatt, said: "The generation and use of solar power not only makes absolute sense from an ecological standpoint – solar is by far the most economical energy source available. Our modules supply clean solar power reliably over several decades, increasing the energy independence of Olympiastadion Berlin GmbH and providing a measure of protection from ever-increasing energy prices."

The German company KOCO Energy AG is project developer and the system installer. Daniel Kruse, project coordinator at KOCO Energy, says: "Our experience of working in cooperation with Solarwatt on numerous projects, combined with our years of knowledge of the structural and architectural requirements of this listed stadium, have enabled us to plan this extremely complex solar plant with quality as an absolute priority from the start."

A key benefit to the stadium operator is that financial investment in the PV system is undertaken by others – a major driver in the expansion of renewable energy in cities. "For us, the rooftop PV system is a further step in making the entire property CO2-neutral," explains Timo Rohwedder, Managing Director of Olympiastadion Berlin GmbH. "Here, neither the City of Berlin as owner nor we as the operator have to invest ourselves; financing and operation are secured for at least ten years."