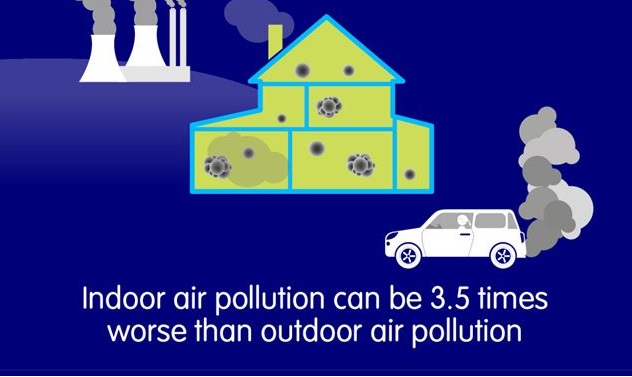 Clean Air Day is the name of an organisation - and of a day falling on June 20. The organisation focused its research on the home environment commissioning air quality testing experts NAQTS to study four properties around the UK.

One of the lead authors, Professor Stephen Holgate, a health and air pollution expert, said: “This study provides early indicators of the scale of the air pollution challenge that we face in the UK - not only on our streets but in our homes.

"With children spending increasing hours indoors exposing them to ultrafine particles of pollution, which can enter the bloodstream and could have a greater impact on vital organs, urgent action needs to be taken to address this issue of indoor air pollution."

Chris Large, a Senior Partner at environment charity Global Action Plan, says: “It’s vital that we raise awareness that air pollution is everywhere, yet there are many things we can do, both indoors and outdoors, to reduce overall pollution and protect ourselves and our families. Some key things you can do to help tackle our pollution crisis are driving less frequently and walking or cycling instead, and opening a window when cooking at home.”

The Royal College of Physicians

In a letter to Michael Gove on June 18, The Royal College of Physicians and the Royal College of Paediatrics and Child Health urged the Environment Secretary to tackle the cocktail of pollutants that lurk inside our buildings by calling for indoor air quality to be included in the forthcoming environment bill.

Responding to the news, George Adams, UK Energy & Engineering Director of SPIE, xplained how technology and maintenance can help to deliver better air quality within buildings. He said: “Nearly 9,500 people die early each year in London due to long-term exposure to air pollution - more than twice as many as previously thought. Furthermore, 92% of the world’s population are exposed to unsafe levels of air pollution relative to international standards. The result being about 7 million deaths globally  that are related to poor quality air. It is also a significant financial strain, with over $4 billion being lost in productivity and associated health costs.

“In the battle to improve the internal air quality of our urban areas, autonomous buildings should have a vital role to play. These environments can help create good air quality so that people working in cities can enjoy clean air, providing peace of mind that they won’t be harming their health.

“By leveraging technologies such as smart filtration methods with IAQ smart sensors, as well as performance-based facilities management methods, we can find out what the levels of air pollution are both inside and outside the building, so that the ventilation process can be managed to improve air quality in the space. It is then possible to determine the best tactics for improving the quality of air inside the building."

Adams continued: “We can harness the data from a building, analyse it, and see not only that the building can perform better in terms of making a cleaner workspace but also overall energy efficiency, the levels and type of lighting, ventilation, etc. From there, it is also feasible to assimilate how people’s wellbeing and performance can be greatly enhanced.

“Even if the indoor air quality doesn’t get included in the forthcoming environment bill, business should call on their facilities contractors now to make the necessary changes to their workspaces. In the long-run the monetary benefits will surely outweigh the initial expenditure.”

Clean Air Day is the UK's largest air pollution campaign, engaging thousands of people at hundreds of events, and reaching millions more through the media. The...