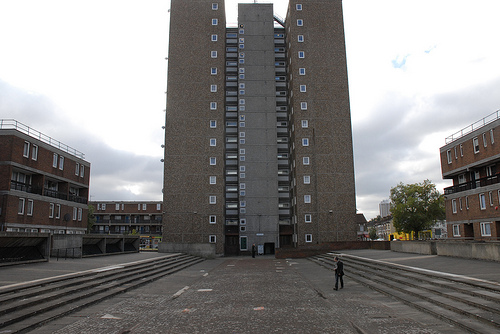 As the government continues its fire testing programme in the wake of the Grenfell fire, another blow to council housing blocks in London (which may be reflected across the country) has been discovered.

Fire testing has thrown up at least one example in a high-rise estate of building defects that might enable a fire to spread more easily but more worryingly would not withstand the blast from a gas explosion - leading to fears of another Ronan Point type disaster.

Ronan Point was a 22-storey tower block in Canning Town in Newham, East London, which partly collapsed on 16 May 1968, only two months after it had opened. A gas explosion blew out some load-bearing walls, causing the collapse of one entire corner of the building, which killed four people and injured 17. The spectacular nature of the failure – caused by both poor design and poor construction – led to complete loss of public confidence in high-rise residential buildings and major changes in UK building regulations resulted.

Residents of the Ledbury Estate in Peckham (the famous home of Del and Rodney Trotter) say that huge gaps have appeared in their walls over the years. (The Lakenal fire spread via gaps that opened up as a result of the heat.) Southwark council (the same council convicted for the failures that lead to deaths at Lakenal) claims it has dealt with each defect as it has been reported. Residents say otherwise. However, the Council has admitted that strengthening works that were ordered after Ronan Point were almost certainly not carried out at Ledbury.

Four blocks on the estate are said to feature cracks that a grown man can easily insert his hand in to. The cracks lead to outside walls and to other apartments - meaning there is both a structural and a compartmentalisation issue.

At this time, ThisWeekinFM understands Southwark has ordered gas supplies to be turned off and issued residents with hotplates on which to cook their meals and free passes to local leisure centres where they can go to wash. A re-housing programme is to commence.

Following the disaster at Grenfell tower, the government’s series of fire safety tests has been continuing running through a series of combinations in cladding and insulation.

Earlier in the week ending Aug 11, a fail was recorded. A wall cladding system consisting of Aluminium Composite Material (ACM) cladding with polyethylene filler (category 3) with stone wool insulation. prompted the government’s expert panel to advise that the results show this combination does not meet current building regulation guidance.

The findings must prompt immediate action, with 111 buildings currently known to have this combination of materials in their wall cladding systems – 90 of which are local authority or housing association owned or managed.

The BRE has already conducted tests on cladding samples from all these buildings, all of which failed the combustibility tests. Building owners were advised to take immediate action by implementing interim safety measures and working with their local fire and rescue service to complete a fire safety audit.

The latest set of test results reinforces the evidence already provided to these building owners about fire risks.

Last week the government announced the independent review of building regulations and fire safety. It will examine the regulatory system around the design, construction and on-going management of buildings in relation to fire safety as well as related compliance and enforcement issues.

The government’s fire testing programme continues and further test results will be published when they are available.

On Aug 11, the fourth in the government’s series of large-scale fire safety tests had been completed by the BRE. Consisting of ACM cladding with a fire resistant polyethylene filler (category 2 in screening tests) and stone wool insulation (a form of mineral wool), this combination of materials has passed the test.

The government’s Expert Panel advise that the results show that this combination of materials can be compliant with current Building Regulations when installed and maintained properly. It could therefore offer a possible solution for some buildings with other cladding systems which have been identified as a hazard.

However the Expert Panel note that cladding and insulation materials can vary between manufacturers and can have different calorific values. The way materials have been fitted and maintained can also affect the safety of the cladding system.

Therefore the clear advice from the Expert Panel is that building owners need to continue to take professional advice as to whether any remedial work is necessary to ensure the safety of their building.

13 buildings over 18 metres tall in England are known to have this combination of ACM with a fire resistant polyethylene filler (category 2) and stone wool insulation. Following initial screening tests, government issued advice to building owners detailing immediate interim safety measures that needed to be undertaken. These measures have been completed for all 13 of these buildings.

Picture: One of the towers on the Ledbury estate

Six fire engines and 35 firefighters and officers were called to a fire at a building under construction on Mitcham Road in Tooting in London yesterday morning just a day...