Hancock's Half-hour - Pledges to Cut its Offices By 75% 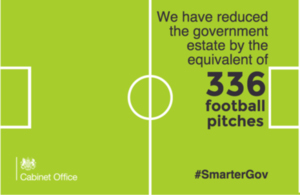 This week, Minister for the Cabinet Office and Paymaster General Matt Hancock took a little time to reveal that the government has reduced the size of its estate by the equivalent of 336 football pitches since 2010. He has called on local authorities to increase transparency by publishing their own estate rationalisation data.

The minister was speaking at the Government Property 2016 Conference, where he launched the latest State of the Estate report outlining progress in consolidating and modernising the estate. The report shows that the government estate has shrunk by 2.4 million square metres since 2010 – a 22% reduction equivalent to 336 football pitches, 43 Shards, or more than the entire principality of Monaco. This means that the total central government estate has fallen below 5,000 holdings for the first time and could fit inside the area of West Finchley in London.

This has been achieved by selling underused property ranging from the historic Old War Office to an old bakery and lighthouse.

It was also formally announced that Blythe House, which is well known as the MI6 HQ in the award winning film Tinker Tailor Soldier Spy and a historic site with great commercial potential at the Liverpool Docks will be sold and put to better use.

This forms part of a Conservative plan to save over £2 billion over the next 10 years. Hancock also announced the government plans to reduce its total number of offices by 75% before 2023, moving from 800 to 200 offices.

Nowhere is this change more visible than in central London, where the report confirmed that the number of government offices has fallen from 181 in 2010 to just 54 today. The intention is to further reduce this number to around 20 buildings by 2025.

Matt Hancock said: "We’re determined to release property the government no longer needs and get out of expensive rentals that aren’t offering value for money. "Today’s report shows the progress we’ve made in creating a more modern and efficient estate, with £1.8 billion already saved for taxpayers. But there is still a lot more we can do. That’s why I’m calling on people across the country to get involved by challenging us through the Right to Contest scheme to release properties we’re not using efficiently enough."

The 'State of the Estate' report also shows that the size of the government estate fell by 300,000 square metres in the past year, with running costs also reduced by 9% (or £279 million) compared to the previous year; the space per government employee has reduced by 20% since 2010, making it more efficient than the UK private sector average of 10.7 square metres; carbon emissions have been cut by 22% since 2010, along with an 11% drop in water consumption and a 38% reduction in paper use.

Picture: The government estate is being kicked in to touch