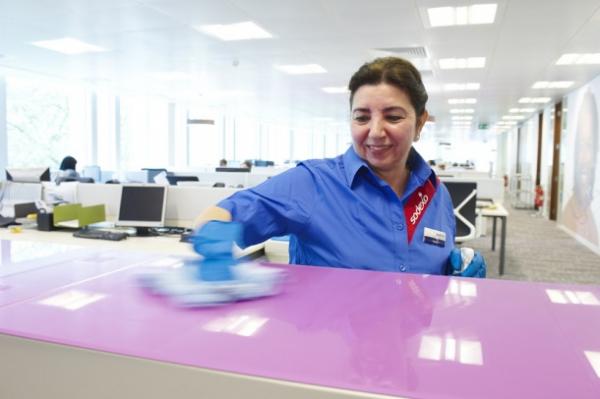 A campaign to improve working conditions in the cleaning industry has been launched by the Equality and Human Rights Commission (EHRC) which has backing from businesses such as Sodexo and Facilicom and trades union UNISON which joined the EHRC’s cleaning taskforce last year.

The campaign follows the EHRC report The Invisible Workforce: Employment Practices in the Cleaning Sector that was published last August.

The new campaign has brought together the recommendations from the report with the taskforce developing principles for responsible procurement. They are aimed at encouraging clients that buy in cleaning services to consider the impact of procurement on the employment practices of cleaning providers.

The taskforce has also developed a range of materials which are available from the dedicated campaign – Clcik Here – to help promote the value of cleaning operatives and to provide cleaners with valuable information regarding their employment rights.

Sodexo points out that its employee recognition schemes, annual Service Excellence Awards, together with its commitment to the Living Wage Foundation’s Service Provider Scheme, are highlighted in the campaign as initiatives which help to improve workplace conditions.

“With around 9,000 cleaners employed by us throughout the UK and Ireland across a range of working environments including the healthcare, corporate, education and defence sectors, our success relies upon employees who are engaged, motivated, and effectively trained,” explained Lauren Kyle, Cleaning Development Manager at Sodexo. “While infection prevention and control is essential to patient care in healthcare facilities, high standards of cleaning in all environments can help to promote wellbeing, reduce absenteeism and improve productivity.”

“We are pleased to have contributed to the Working Group for Dignity & Respect” said Phil Smith, Corporate Relationship Director at Facilicom. “The Commission’s commitment to improving working conditions for the nation’s ‘hidden workforce’ is not only driving a step-change in best practice for cleaning employers but is crucially delivering a wake-up call to everyone to take notice of, and respect, those who keep our world clean."

For its part, UNISON has stated it is ‘delighted’ that the EHRC has embarked on the project as well as recognising what it argues are often potentially poor employment practices. It has over 40,000 members who work as cleaners across both the public and private sector. “We are particularly pleased that we were invited to be part of the taskforce set up to explore the issues further,” said Michelle Singleton, speaking on behalf of UNISON.

Picture:   Sodexo and trades union Unison are among those backing a campaign to improve the working conditions in the cleaning industry.

The Cordant Group, which has operated in both the recruitment sector (with an emphasis on the blue collar services) and the cleaning, security and M&E compliance...

With fears of an ageing workforce and impending skills gap gripping the sector, The Building Futures Group has launched a national campaign with the aim of attracting...